Brooklyn Strong and Hidden Stash far back in Ky. Derby

LOUISVILLE,, Ky.--Hidden Stash, syndicated by Braxton Jones Lynch and partially owned by Charlie Fenwick, and Brooklyn Strong, by Wicked Strong, who stands at Dr. William Solomon's Pin Oak Lane Farm in New Freedom, Pa., both got shuffled far back in the 19 horse Kentucky Derby field and were never able  to wend their way forward, finishing 14th and 15th respectively. 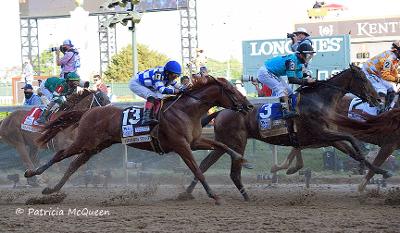 Brooklyn Strong, right, just ahead of Hidden Stash near the beginning of the Derby (Photo by Patricia McQueen)"It was quite an experience," said Fenwick, who attended the Derby. "It's touted as "the most exciting two minutes in sport," and it certainly is exciting. Every person there had given serious thought to what they would wear."

"It was a cavalry charge when the broke, and we were in the back of the cavalry charge, ans somehow never got going," said Fenwick. "But he came out of it OK, and he's live to fight another day."

Hidden Stash broke from the 13 post and was four wide around the first turn an made little impact from there.

Brooklyn Strong broke from the three post,, was solidly bumped into the gate at the start and was then jostled between horses, was three wide around both turns and was never a factor.

MEDINA SPIRIT, owned by Zedan Racing Stables, trained by Bob Baffert and ridden by John Velazquez, led the whole way to win by 1 1//2 lengths, giving Baffert his seventh win, a record, and Velazquez his fourth win and second consecutive win after scoring with Authentic last fall in a Covid disrupted Triple Crown series.

But, as Baffert pointed out after the race, Medina Spirit didn't know how much he had cost.

“This little horse coming in here, he's always shown he's an overachiever,” Baffert said. “His heart is bigger than his body."

Those four were ranged across the track, with Median Spirit left to Essential Quality on the right, and they were another 4 1/2 lengths in front of fifth placed O Besos.