GLYNDON, Md.--An incredible horse that no American jockey would ride who was ridden by an Irish jockey who had never before jumped a straight up-and-down timber fence ran away with the Maryland Hunt Cup on Saturday, April 24, winning by 112 1/2 lengths and breaking the old track record by three full seconds. 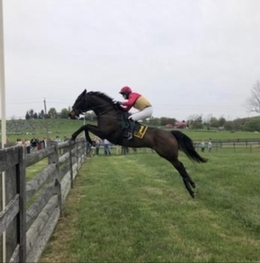 Vintage Vinnie over the third fence in the Maryland Hunt CupArmata Stable's Vintage Vinnie, ridden by Dan Nevin and trained by Joe Davies, went straight to the front over the first fence, was a full fence ahead by the third fence and led at times by well over two fences to win over the field of eight very good horses that never got close to him.

The race was live streamed, but little was seen of Vintage Vinnie because he was so far ahead,

Joe Davies, who had saddled Senior Senator to win the Maryland Hunt Cup three times, in 2016, 2018 and 2019, picked out Vintage Vinnie (Ire) because he had jumped around the Grand National Course.

"I knew he had an engine, but, no, I didn't expect him to win like that," said Davies. "We knew he had a high cruising speed, but we didn't know if he could maintain it for four miles. Dan said he still felt good going to the last fence. He broke the record with no other horse near him. Dan gave him a great ride."

"THE LAST few weeks, we'd been searching for a rider for him,' said Davies. 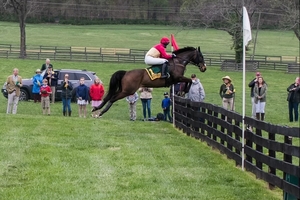 Vintage Vinnie, ridden by Dan NevinVintage Vinnie had only run five times in the States before the Hunt Cup, finishing first twice, second twice and once third, most recently winning the My Lady's Manor under Chris Gracie by 5 1/4 lengths in the same front running way.

"Chris took off him after the Manor," said Davies. "He said he didn't want to go that fast into a fence ever again. And Eric Poretz wanted no part of him. Eric had ridden him in a race and had exercised him. He didn't give me an excuse for not riding Vinnie. He just said no. No other rider stepped up."

Poretz had ridden Senior Senator, the horse Davies said was "the craziest horse that ever looked through a bridle," throughout his career so he has to be one of the bravest jockeys alive, yet he wouldn't ride Vinnie.

"Keri Brion had ridden Dan Nevin in Ireland, and with Keri's help we got Dan to ride Vinnie," said Davies. "Dan arrived in the States three days before the Hunt Cup. He had never jumped a straight up-and-down timber fence."

"We started him by giving him a school over fences on my hunter," said Davies. "Then he got on Vinnie, who proceeded to run off with him. He then jumped awkwardly over a couple of timber fences. In no way was it a good school." 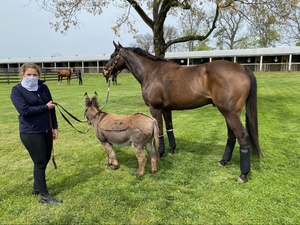 Vintage Vinnie with Fernando and Davies' assistant Ashton Williams"The day of the Hunt Cup, Blythe talked to Dan, as she had ridden horse like Vinnie," said Davies. "She said, `Just put your hands down and let him run,' and Dan did just that."

After Vintage Vinnie was long finished, there was a good race for the remaining places, with Bruton Street-US' Preseli Rock (Ire), trained by Jack Fisher and ridden by Hadden Frost, eventually finishing second over Lucy A. Goelet's Rocket Star Red, trained by Mark Beecher and ridden by Brett Owings.

Off Vintage Vinnie's performance in this year's Hunt Cup, he looks like he could replicate Senior Senator's thee wins in the Hunt cup.

And then, who knows, if all stays well, Vinnie has jumped around the Aintree Grand National course, so will Davies consider sending him back to England for a try there?