NASHVILLE, Tenn.--Zanjabeel (GB), who rated beautifully, went to the lead after the last fence in the $200,000, G1 Calvin Houghland Iroquois Stakes and drew away to win the 5 lengths over Modem (GB) and Jamarjo (Ire) in the 3 mile race before a huge crowd on a day that the temperature reached 95 degrees.

With a misting machine and hoes at the finish and misters on the walk back to the stables, all the horses were okay despite the heat.. 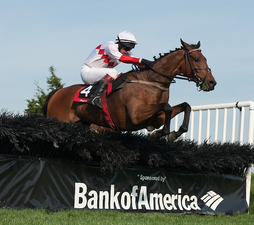 Zanjabeel over the last fence on the way to winning the Iroquois"I just sat there," said Ross Geraghty, who rode him in the Iroquois. "I wanted him to tell me what to do. He's a cool little horse. I was confident."

"This was a very special win," said Hendriks.

The Iroquois brought together the three finalists for last year's Eclipse Award, the Award winner Mr. Hot Stuff, All the Way Jose and Modem.

All the Way Jose, trained by Jonathan Sheppard for Buttonwood Farms, went to the lead late in the race and fell early on the backstretch won.

'He hadn't even started to run," said Sheppard.

Mr. Hot Stuff, trained by Jack Fisher, finished fourth, and Modem, trained by Elizabeth Voss, finished second for the fifth time in a G1 stakes in this country.

The 5-year-old Zanjabeel, owned by George Mahoney's Rosbrian Farm and Benjamin and Wendy Griswold, trained by Ricky Hendriks and ridden by Geraghty, has won twice now for these connections along with placing second in a G1 stakes and second in a G2 stakes.

THE VERY successful British trainer Gordon Elliot, who had raced Zanjabeel 21 times in England with three wins, three seconds and three thirds, brought Zanjabeel to the States last fall with the intention of selling him and sent him to Hendriks' barn.

"I  want to thank Gordon Elliot for selling us this horse," said Hendriks in an interview at the race course  after the race.

"Gordon has been a friend of mine for years," said Mahoney. "He brought this horse over and kept him at Ricky's, so we got to see him before he ran."

Elliot ran him in the Foxbrook Champion Hurdle race for novice horses, and he won easily by 4 1/2 lengths.

"Gordon had about four people lined up to buy Zanjabeel, but he told George that he had first choice. `If you want him he's yours,' he said," said Hendriks.

Mahoney bought the horse after his race at Far Hills.

"I knew Ben (Griswold) had been looking at Zanjabeel, so I called him and asked him to be my partner in the horse," Mahoney said.

"We ran him back two weeks later in Georgia in another novice stakes, and he won again very easily," said Hendriks. "We gave him the winter off, and then he ran second to Balance the Budget in the G1 Gold Cup. That was a bit of a step up. The he ran second at Middleburg in the G2 race (the Temple Gwathmey), and he was second behind Lyonell."

"He's an easy going horse," said Hendriks. "There are no problems. He's easy to rate and a good jumper. Eve (Ledyard) exercises him. She gave him his final work before the Iroquois. This win was a big team effort."

SHEPPARD saddled Hudson River Farm's Iranistan, ridden by Darren Nagle, to win the $100,000 Marcellus Frost Champion Hurdle at 2 1/4 miles by 6 lengths over Gibralfaro (Ire), owned by Riverdee Stable, trained by Fisher and ridden by Sean McDermott, with The Fields Stable's Barnacle Bill, trained by Elizabeth Voss and ridden by Jack Doyle, another 3/4 of a length back in third..

"He's a very athletic horse," said Sheppard. "He was running on the flat, and I was worried about his getting claimed. An older lady owned him, and she wasn't interested in running over fences, so Hudson River and I bought him."

Iranistan ran four times on the flat, with his last flat race on Feb. 1, and he started his jumping career in an allowance race at Camden on March 31.

"This race was a huge step up for this horse," said Sheppard. "Previously he had won twice, but in allowance races for 4-year-olds, and now he's running in a stakes."

Iranistan won in Camden by 11 1/2 lengths and then won an allowance race for 4-year-olds at Middleburg by 10 lengths.

Sheppard pointed out that 4-year-olds get a good break in the weights, as Iranistan had to carry only 144 pounds while the others in the race carried from 153 to 156 pounds.

"In his other races, he had gone right to the front, so I was pleased that he settled in in back," said Sheppard. "When they came down the hill, he was on his way. He jumped brilliantly. When Darren shook the reins at him, he drew away. There are two novice stakes at Saratoga that we're looking at for his next races."

Iranistan settled in second place for the first mile, moved up to take the lead the first time through the stretch and drew away in the stretch.

SARAH JOYCE, owned the The Fields Stable, trained by Voss and ridden by McDermott, won the third of four stakes on the seven race card, the $50,000 Filly and Mare Hurdle Stakes, by 1/2 length over a closing Inverness, owned by KMSN Stable, trained by Sheppard and ridden by Michael Mitchell, with Paddy Young's For Goodness Sake (Ire), trained by Leslie Young and ridden by Willie McCarthy, who took the lead for a few strides after the last fence, dropping back to finish third.

It was Plated's first start in a sanctioned race after a couple of races at point-to-points.

For his second win of the day, Fisher saddled Mrs. S.K. Johnston's Cite, ridden by McCarthy, to win the $40,000 Sport of Kings Maiden Hurdle by a neck over Gary Barber's Belisarius (Ire), traied by Kate Dalton and ridden by Bernie Dalton, with KMSN Stable's Jump to Juneau, trained by Sheppard and ridden by Doyle, placed third.