LEESBURG, Va.--Todd Wyatt had a superb weekend, saddling four winners, two over hurdles and two on the flat for three different owners, at Loudoun Point-to-Point on Sunday, April 18 after winning one of the three races at the Grand National the day before. 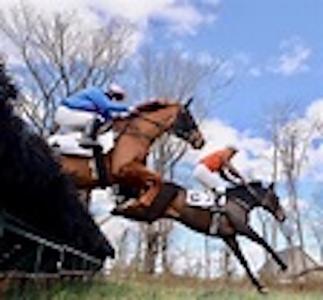 Loudoun Point to Point "It was exciting, and a lot of fun," said Wyatt. "We're very appreciative of all our owners."

Wyatt's first winner at Loudoun was Mrs. S. . Johnston Jr.'s Lost Story, ridden by Eddie Keating, who won the first division of the 2 1/4 mile Maiden Hurdle by 1/2 length over Emily Aster's Pony Up, trained by Ricky Hendriks and ridden by Courtney Dankanich, in 4:50, the fastest time of the day.

"We've had Lost Story for a while," said Wyatt. "He's just coming off an injury. We've always liked him. He's been second or third s numbrr of times, We were just out there at Loudoun for a school."

The Maiden Hurdle was split into three divisions, and Wyatt also won the third division, this time with Charlie Fenwick's Withoutdestination (GB), ridden by Graham Watters, who beat Bon Nouvel Chasers LLC's Thousand Park, trained by Julie Gomena and ridden by Ross Geraghty by a nose in 5:03.

"My wife and Sean Clancy picked him out as a 3-year-old from a sale at Tattersalls in England," said Wyatt. "He's won a couple of flat races at point-to-points, the latest being at Elkridge-Harford. He had s nice little spin around yesterday. Next, I'll try to find a maiden hurdle for each of them, possibly at Middleburg."

"Arch Kingsley sent Boss Man to me to try to make a timber horse of him," said Wyatt. "We hunted him all winter, but he didn't turn out the way we'd hoped. We hope to run him back over hurdles in three or four weeks."

"Be Counted has won twice over hurdles," said Wyatt. "We're going to try to find a ratings hurdle for him."

Valentine also trained the winner of the second division of the Maiden Flat, Magalen Bryant's Sea Mist. also ridden by Betlamini, who beat Webb, owned by Gregory Hawkins, trained by Janet Elliot and ridden by Keating by 3 lengths,

Devon rode Soul Approval to best Julie Nafe on Sky Babe by 10 lengths in the Side Saddle Flat race.