Fisher's Schoodic leads a strong group of timber entries in My Lady's Manor.

MONKTON, Md.--Schoodic looks like the horse to beat in the first major timber race of the year at My Lady's Manor, which is scheduled for Saturday, April 10, with four races including the featured $30,000, 3 mile My Lady's Manor with seven entries.

But to win, Schoolic will have to beat a previous Manor winner, Mystic Strike, as well as five other top timber horses. 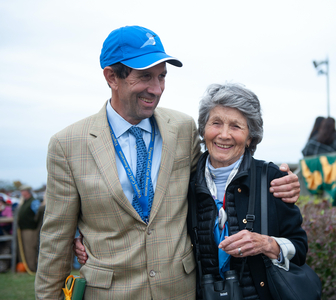 Jack and his mother Dolly Fisher  after the Manor in 2019While a limited number of spectators will be allowed, the races will also be live streamed and available on the website of the National Steeplechase Association.

After an unsuccessful career on the flat as a 2- and 3-year-old, Schoodic won his first start over hurdles as a 3-year-old for his breeder, Edith R. Dixon, and raced in her colors  for trainer jack Fisher throughout his hurdle career,

Running 30 times over hurdles, Schoodic won six times, including once in a G2 and once in a G3.

Running only once in 2020, placing fifth in an Allowance, this is Schoodic's first start in 2021.

IN HIS FIRST start at the Manor, Schoodic will be facing a strong contender and a previous winner of the My Lady's Manor Stakes in Upland Partners' Mystic Strike, trained by Todd McKenna, who will be ridden by Gerard Galligan.

Mystic Strike, ridden then by Mark Beecher, won the Manor in its last running in 2019, the meet having been canceled due to Covid in 2020.

Mystic Strike since then has won the Pennsylvania Hunt Cup twice, in 2019 ridden by Beecher, and in 2020 ridden by Thomas Garner.

In the only time that Schoodic and Mystic Strike have met, Schoolic won the Genesee Valley Hunt Cup Stakes while Mystic Strike was pulled up.

Fisher also has a contender in Bruton Street-US' Drift Society (Ire), who will be ridden by Graham Waters.

Drift Society never started in a recognize race in Ireland, but began his racing career in the States in 2014 as a 6-year-old, running over timber 15 times since then with two wins.

Drift Society was second at the Manor in 2017 and was fourth in 2018 as well as having run in the Maryland Hunt Cup four times with two seconds and two  thirds.

Wendy Hendriks' Officer Sydney, trained by son Ricky and ridden by grandson McLane, has won two of four starts over timber in 2020 and 2021 since being converted from hurdles.

Officer Sydney ran over hurdles 10 times in England, winning twice, and, since being imported in 2016, won twice from seven starts in steeplechase races for George Mahoney's Rosbrian Farm.

Fisher has a third entry in the Manor, Bruton Street-US Preseli Rock (Ire), who will be ridden by Connor Hankin.

Preseli Rock ran four times on the flat in England, then six times over hurdles with one win before running in two steeplechase races in England in 2016 and 2017.

Preseli Rock then ran four times in this country in 2017, winning a Maiden Special Weight and a Steeplethon at Great Meadow but hasn't started in a sanctioned race since 2017.

Vintage Vinnie, owned by Armata Stable and trained by Joe Davies, who will be ridden by Chris Gracie at the Manor, has only run over timber four times but has run over the Manor course, having placed second there in 2018 in the maiden race.

Vintage Vinnie, who switched back and forth between hurdle and steeplechase in 22 races in Ireland and England from 2014 to 2017, won there four times after winning first first and only flat race in 2014.

Vintage Vinnie has won once and placed second twice and third once in his only four starts in this country, but he was second in the Grand National in 2019 and third in the Pennsylvania Hunt Cup in 2020.

Despite his short resume, Vintage Vinnie does have a successful resume and could be a factor at the Manor.

Completing the field is Irv Naylor's Jeffery G, trained by Jason Cole, who will be ridden by Forrest Kelly.

Jeffery G ran twice over hurdles in 2012 and has run 13 times over timber since 2015 without ever winning or placing second.

He has one third in a Maiden race and was fourth in te Maryland Hunt Cup in 2019.