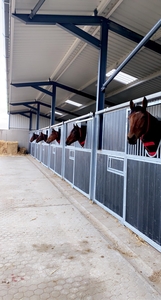 Keri Brion's string in her barn in Ireland"Finally," said Brion after Irv Naylor's Scorpion's Revenge, ridden by Dan Nevin, a local jockey, won a 2 3/8 mile National Hunt Flat race at Cork on April 4. "The ground has finally come around."

Running mid-pack throughout most of the race, Scorpion's Revenge moved six wide around the final turn and went into the lead 2 furlongs from the wire.

Shall Donn moved up on his inside 1 furlong out and looked like he was going to go right on by, but Scorpion's Revenge found another gear and sprinted off to win by 1 1/2 lengths.

"When he got out in front, he was just running a bit green," said Brion. "He saw the other horse come up to him and went on again. It would have taken a good horse to get by him today."

Scorpion's Revenge went off at odds of 32-1 in the field of 17 horses.

"It was a relief to finally win," said Brion. "It was very exciting. This was my first winner since going out on my own. I had a couple of winners that I trained while I was still Jonathan's assistant trainer. I was delighted for Dan. It was his first win as a jockey, too."

BRION SADDLED French Light in a hurdle race on April 5 at Fairyhouse, but French Light never showed anything and finished mid-pack.

"All three of the top three horses were trained by Willie Mullins," said Charlie Fenwick, a partner in Bruton Street. "Franco beat the odds-on favorite but was no match for the winner."

On Saturday, April 3, another horse that Fenwick has a share in, BNB Racing's Hidden Stash, ran fourth in the G2 Toyota Blue Grass Stakes.

Hidden Stash had been on the Derby road, but now stands only 22nd or 23rd in points to get into the Derby.

"We were pleased with him," said Fenwick. "That was the best race he's been in. He was the only horse that was passing horses in the stretch, but he was still beaten by 10 lengths."