MONKTON, Md.--Eddie Keating rode four winners, including three timber races and one flat race, on the six race card at the Elkridge=Harford Point-to-Point on April 3. 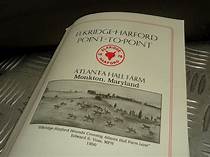 "It's easy if you have good horses under you," said Keating, whose previous biggest day was three wins at Howard County last year.

Keating began his skein of victories with a win in the Open Timber on Frank A. Bonsal Jr.'s Stand Down, trained by Casey Pinkard Savin.

"He had just had a race last weekend, so this was just going to be a school around, " said Keating. "I started in the back of the field, but he was jumping so good, and with a half mile to go I was just behind the leaders, so I just kicked on and he won easy. He came out of it fresh."

Stand Down won by a couple of lengths over Kinross Farm's Just Wait and See (Ire), trained by Richard Valentine and ridden by Chris Gracie in a six horse field,

KEATING THEN rode Riverdee Stable's Include It, trained by Todd Wyatt, to easily win the Novice Timber by 12 lengths over Irv Naylor's Indian Hawk (Ire), trained by Cyril Murphy and ridden by McLane Hendiks in a three horse field.

"I went to Todd's a couple of days ago and popped Include It over a couple of fences, and I liked him," said Keating. "Todd asked my if I wanted to ride him, and I said yes. Chris had ridden him before, and he gave me a couple of tips before the race."

Keating rode Eclipse Award winner Zanjabeel (GB), owned by Meadow Run Farm and trained by Stephanie Moore, to win by 3 lengths in a two horse race over Gracie on Flash Jackson, owned by Ann Jackson and trained by Wyatt.

"He's obviously a good horse," said Keating. "He hit a soft spot coming up the hill towards the finish, but then when he got on good ground again he went on again to win."

Hendriks rode the winner of the fourth timber race, the Heavyweight, on Hooded, owned by Naylor and trained by Murphy, beating Gracie on Mrs. George Ohrstrom's Hafajay (GB), trained by Valentine.

Keating's fourth win was in the 3 mile Amateur Flat race on Withoutdestination (GB), owned by Charles Fenwick and trained by Wyatt.

The 1 mile Open flat race was won by Dancing Til Dusk, owned and trained by Alexandra White.

A very successful flat track trainer, Bernie Houghton, saddled his own Charmed, ridden by his son Thomas, to win the Large Pony race over six entries.

This was Tom's second win at Elkridge-Harford n his young career, having won the Small Pony race there two years ago.

Jaclyn Shore won both the Junior Field Master Chases, wining the Pony race  on Balls to the Walls and the Horse race on Grandflora.