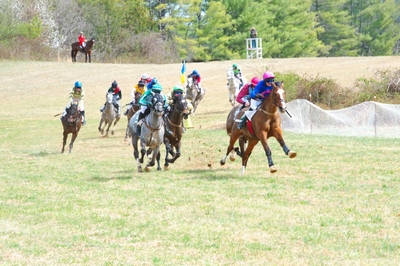 About halfway through the race, the lead horse in the five-horse field stopped at a fence, and the one by one behind him, all the following horses stopped too.

Obviously confused, the riders milled around in a circle for a couple of minutes, and finally one set off again, followed by the rest.

Coming to the stretch, Elucidation moved into the lead and won by 1/2 length over Huyana, ridden by Eddie Keating.

"We didn't expect the leader to stop," said Dowling. "After that, it was like a roller coaster. The horses behind had no where to go. I've never seen anything like that. It was quite extraordinary."

"ELUCIDATION is not a very big horse," said Dowling. "His owner was watching him last year when he was running over hurdles, owned by Irv Naylor and trained by Cyril Murphy. They ran him in a claiming race last fall, and we claimed him. We took him home and schooled him in the indoor and started him over timber."

"I'm very hopeful for him," said Dowling. "He's probably one of the best prospects I've ever had. He was a good hurdle horse, and I hope he'll be a good timber horse.

"We'll head next to Middleburg, I think," said Dowling. "I don't think he's ready for the big Maryland fences yet."

Doug Fout saddled three winners for Beverly Steinman including Marvari in the Maiden Hurdle, Deposit in the Open Flat and Wildcat in the Maiden Flat.

Frank Bonsal's Stand Down, ridden by Eddie Keating and trained by Casey Pinkard Savin, won the Open timber, and Leslie Young saddled Cause for Pardon to win the Novice Rider Flat race.