MINERAL SPRINGS, N.C.--Jonathan Sheppard won two races and finished second in a third at the Queens Cup Steeplechase in Mineral Springs on April 28 to continue to lead in both Trainer - Races Won and Trainer - Money Won categories. 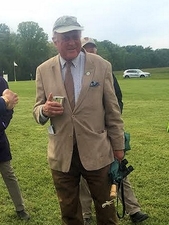 Jonathon Sheppard at Willowdale Steeplechase last year after Codrington College's win thereIn fact, he still leads by three in Races Won, not by two as was reported in a previous story that said Ricky Hendriks had drawn to within two wins of Sheppard.

The National Steeplechase Association had missed one of the races won by Sheppard when the standings were posted on April 30, but corrected its mistake mid-week.

Ed Sawyer of Albany, N.Y., owns Hudson River Farms, and has been an owner for Sheppard for a number of years, beginning with Nine Pins, and he and Sheppard own two mares together.

"He's a nice little horse," said Sheppard. "He's small and a little naughty. He's always thinking of something naughty to do, but he's not a bit mean."

"His first time out was at Camden," said Sheppard. "He was a little confused because he was used to running over the English hurdles, which are smaller and easier to brush through. It took him a little while to get used to our hurdles."

"He took the lead two fences out, but another horse came up to him, and they duked it out to the finish. It was a great win, and I'm happy for Ed."

"WE GOT Codrington some years ago," said Sheppard. "We ran him over hurdles. He won a maiden claiming race at Willowdale last year,  but he didn't want to put out over hurdles. Darren suggested running him over timber. We hunted him last winter."

"He ran second at the Warrenton Point-to-Point (in his first start over timber). He ran second, but he was interferred with in the stretch. We didn't claim foul. If it had been a money race, we'd have claimed foul, and he probably would have been moved up to win."

"This was his first time in a sanctioned race over timber," said Sheppard. "He jumps so big that he loses time over fences. He hit a fence and lost time, but he caught up between the second to last and last fences under a drive and won impressively. It was a good, solid effort."

"It was kind of fun," said Sheppard. I don't have many timber horses."

"I own half of Codrington, because when I told Ed we were going to run him over timber, he said he hated timber, so I said, `So do I, so let's own him together.'"

Rather Be Racing's Kremlin, ridden by McCarthy, won by 10 lengths over DASH Stable's Whitman's Poetry, ridden by Sean McDermott.