UNIONVILLE, Pa.--Cheshire Point-to-Point on Sunday, March 28 at Plantation Field has two sanctioned races and eight point-to-point flat and timber races, and, although the meet is closed to spectators, complete taped coverage will be available later at https://steeplechase.tv/. 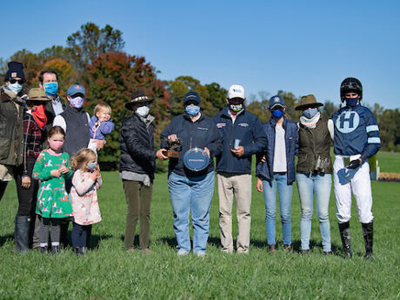 Neilson, Hendriks, and McKenna families celebrated the Louis Neilson II race win by McLane Hendriks (far right) at Willowdale last fall (Photo by  Tod Marks)Extended members of the Neilson family dominate the entries for the $7,500 Louis Neilson III 3 mile timber race for apprentice riders, which has been divided into two sections with four entries each.

Section one, which will be run at the seventh race at 1:30, is topped by Wendy Hendriks's Office Sydney, trained by son Ricky and ridden by grandson McLane, who won the first running of the race at Willowdale last fall.

Paddy's daughters Kathy and Sanna will saddle the other three entries, Aquies ridden by grandson Parker Hendriks and It's Nothing ridden by Aaron Davis for Kathy and Royal Ruse, ridden by granddaughter Skyler McKenna for Sanna.

RICKY HENDRIKS will saddle Cheers to Us for his mother Wendy with son McLane in the saddle, and Joe Davies saddles Some Response for son Teddy Davies, who won his first race over timber at Piedmont March 20, to complete the entries in the second section..

Cheshire opens at 10:30 with Small, Medium and Large Ponies, with good entries of five or six per race, followed at 11:30 by an Amateur/Apprentice Rider 1 mile flat race and a 1 1/8 mile Open flat race.

Timber racing begins at 1:00 with the sixth race, the 3 mile Miles Valentine Memorial Novice race with seven entries, then at 2:00 the eighth race, the Joseph Walker III Memorial Cheshire Bowl with five entries.

Full entries can be found at NSA for the two sanctioned races and at Central Entry Office for the point-to-point races.