Hidden Stash ran second in the G2 Tampa Bay Derby, but with a good excuse

TAMPA, Fla.--Although Hidden Stash only ran second in the G2, 1 1/16 mile Tampa Bay Downs Derby on March 6, he certainly had a very good excuse for the loss. 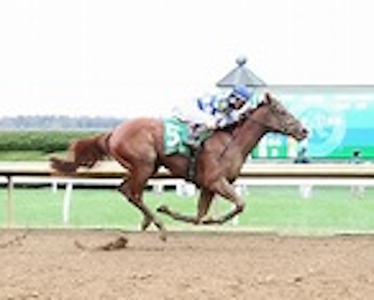 Hidden Stash winning his Maiden race at Keeneland (Photo by Coady Photography)Owned by BBN Racing LLC, a syndicate put together by Braxton Jones, a daughter of Richard and Annie Jones of Unionville, Pa., trained by Victoria Oliver and ridden by Rafael Bejarano, Hidden Stash ran second to Helium, beaten by 3/4 of a length in a time of 1:43.55.

Earlier this year, Hidden Stash ran third by a little over a length in the G2 Sam Davis Stakes at Tampa Bay, which was run in 1:44.30, so his times and placings are improving.

Charlie Fenwick, one of the partners in Bruton Street-US, this year's Eclipse award winning owner, is a member of the BBN LLC syndicate.

"I just found out yesterday that the horse that was used to lead Hidden Stash to the gate was a mare," said Fenwick in an interview on March 8. "Hidden Stash got quite upset, and Bejarano told the mare's rider to let him go. Then Hidden Stash ran off with him, and he ran an eighth of a mile. An outrider had to catch him."

"At the end of the race, he just came up a little empty," said Fenwick. "I must have gone to bet, because I didn't see him run off. At one point in the stretch, I thought he put his nose in front. Initially, I was disappointed, because I thought he'd looked the other horse in the eye and just couldn't get by."

"I GOT AN email right after the race from a friend of mine who doesn't know anything about racing, and he said it was too bad he didn't win, but it was probably because of the way he ran off before the race," said Fenwick. "I didn't know what he was talking about. I just heard about it last night."

"I heard that Bejarano explained to Oliver that this horse always has a kick in the stretch, and that he was afraid that it was because of the screw-up in the warm-up that he lost," said Fenwick."

"We're headed for the Blue Grass at Keeneland the first Saturday in April," said Fenwick.

"He's entered in the G1 Novice Stakes at Cheltenham," said Fenwick. "He's the fourth favorite,, but he's going to run. Mullins' other horse is in the race, too. But it's not every day that you get to go to Cheltenham, so he's got to go. But I'm not going. No owners will be allowed at the track."

Valued Notion went right to the lead and widened his lead in the stretch before lugging in and hitting the rail, but he recovered to go on to win by 1/2 length.

GRAHAM MOTION had a winner at Tampa Bay on Feb. 27.

Saturday Sun was rated three wide in the second flight, advanced on the leaders on the turn and went on to win under a firm ride.

BERNIE HOUGHTON has had two winners at Penn National recently.

Octoraro Orphie steadily advance from fifth early on, swung wide into the stretch and went to the lead to win by 1 length.

Somerset Bay went to the lead after a furlong and held on stubbornly to win by a head.