JAMAICA, N.Y.--A pair of Maryland-bred fought to the finish in the $100,000, 7 furlong Jimmy Winkfield Stakes at Aqueduct on Sunday, Jan. 31, but it was their names that were just as great as their rousing finish. 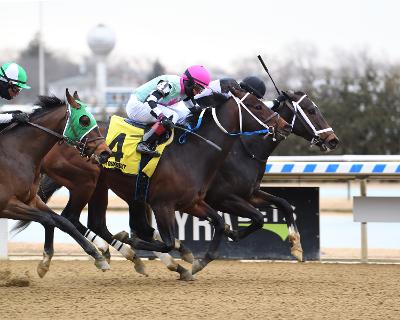 Russell, married to top Maryland jockey Sheldon Russell, first bought a filly by Golden Lad out of Hello Now at a yearling sale in 2017 for $6,500.

Whenever Sheldon saw Brittany, he called out, "Hello, beautiful." so she named the filly Hello Beautiful.

That filly turned out to be a great buy, as, now a 4-year-old, she has won three stakes at Laurel this year, all ridden by Sheldon.

So in 2019, Brittany, in partnership with Dark Horse Racing, bought Hello Beautiful's half brother by Mosler for $10,000.

Whenever Sheldon called out "Hello, beautiful" in greeting to Brittany, she answered him, "Hello, Hot Rod."

So, naturally, they named the Mosler colt Hello Hot Rod.

Hello Hot Rod, bred by Ellen Charles at Hillwood Stables in Maryland, has now won three in a row, a waiver maiden claimer, an allowance optional claimer and now a stakes race.

Return the Ring, second in the Stakes , was bred by Cynthia and Charles McGinnes and foaled at their Thornmar Farm in Chestertown, Md.

He is by Speightster out of Fancy Diamond, so they named the foal Return the Ring.

Fancy Diamond also has a 2-year-old the McGinnes' named Please Marry Me.

If names make the horse, all these will go far.

GRAHAM MOTION saddled Gary Broad's Promise the World, by Union Rags, to win her first ever race, a $43,720. 1 mile Maiden Special Weight for 3-year-old fillies at Laurel on Jan. 24.

Promise the World had to swing six wide on the turn but advanced through the stretch to win by 3//4 length.

Motion also saddled Albert Frassetto's homebred Candy Flower to win a $33,000, 1 1/16 mile Claiming turf race for fillies and mares 4 and up at Gulfstream Park on Jan. 20.

Candy Flower won by 3/4 length but she was claimed for $35,000 by trainer Saffie Joseph for Jordon Wycoff.

Suppress went right to the lead from the start and drew of to win by an impressive 9 1/4 lengths.

RICKY HENDRIKS saddled Debra Kachel's Tribulation to win a $7,500 Maiden Claiming race  for 4 year olds and up at Penn National on Jan. 20.

Tribulation swung four wide on the turn and went on to win by 6 3/4 lengths.

Blameless won by a nose but was claimed for $30,000 by trainer Bobby Dibona for Roddy Valente.