Houghton and Motion have winners, Sheppard's first runner in Ireland is scheduled

GRANTVILLE, Pa.--From the winner's circle, Bernie Houghton has had four winners, including one of his own and one of his mother's, and Graham Motion has saddled two winners in Florida. 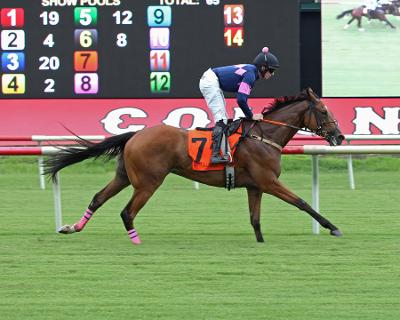 Baltimore Bucko winning at Colonial Downs on Aug. 11.Jonathan Sheppard sent five horses to Ireland to race there over the winter, and the first to start over there will be Baltimore Bucko, who is scheduled to run Tuesday, Dec. 29 in the first race at Limerick.

"Bucko runs Tuesday if the race isn't called off," said Keri Brion, Sheppard's assistant trainer who is in charge of the Irish contingent. "We've had lots of rain."

"The ground will  be very heavy," said Brion. "Not ideal, but he needs the run to get a rating."

TVG shows racing from Limerick and Leopardstown, only recently TVG has only had international racing on Wednesday through Sunday, but the race should be available on various betting channels like xpressbet if it's noton TVG.

Doyle runs horses in point-to-points and than sells them, and Brion has bought a few horses for various owners from him.

Also in Ireland are Irv Naylor's French Light, Clondaw Camp and Fancy Pants, both owned by Buttonwood Farm along with Baltimore Bucko, and Francois, who with Winstron C is owned by Hudson River Farm.

Gerard Galligan, this year's Leading Jockey, is in Ireland to ride the horses there, and Parker Hendriks also went over to work for Brion.

"That was his first race back since March," said Houghton of All Tacked Up's fith race, having previously run in maiden special weights with one second. "I stopped with him in March when racing was shut down, and then gave him a little rest. This time I put him in a race I thought he could win."

"She's a nice filly," said Houghton. "She was second in a maiden special weight, and then we tried her in a stakes. She was fourth in the Shamrock Rose Stakes, but she ran good, and she was still a maiden. Then she got sick, so we gave her some time off. She won this race pretty nicely."

"Her owner is a nice guy," said Houghton. "This filly was second last time out, and now she's won."

"She's a real tough mare," said Houghton. "She's always in the money. I don't know if Mom is going to keep her to breed, but before she decides, the mare has still got some more races in her."

Houghton also claimed My Devils Child, bred by Ed Madden, on Dec. 9, after the gelding won a $10,600, 6 furlong Claiming race.

"My Devils Child was claimed from me," said Houghton. "They ran her back for the same price, so I asked Ed if he wanted to claim him back. Ed is a friend of the family. He worked for Michael Matz a while ago. Now he helps us at horse shows. He holds my son's horse between classes."

Strike the Top vied from the lead right from the start, pulling into the lead qt the 3 furlong marker and going on to win, eased, by 11 lengths.

Strike the Top had previously run in maiden special weight races, finishing first one, second once and third one and was dropped down or the win.

Wertheimer et Frere's homebred Flutiste, trained by Motion, won a $39,000, 1 mile Maiden Claiming race on the turf for 2-year-old fillies by a neck at Gulfstream Park on Dec. 16.