PINE MOUNTAIN, Ga.--Competitive and interesting races over timber and hurdles are scheduled to begin with a 1 p.m. post time on Saturday, Nov. 7 for the first race at Callaway Gardens, and all seven races will be available via live stream on the National Steeplechase Association's home page. 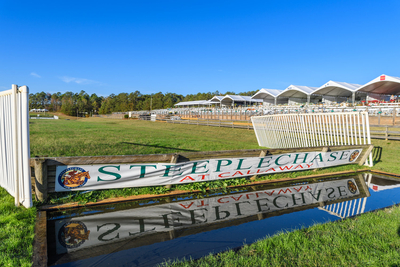 The action begins right with the first race, a $10,000 Maiden timber race, with a stakes winner over hurdles making his first start over timber under rules.

Can Surprising Soul, a multiple graded stakes winner who won the G1 Lonesome Glory among others, transfer his talent to timber and beat a competitive field of seven including Skydiving, trained by Jonathan Sheppard and Belisarius, trained by Kate Dalton.

Surprising Soul's new career is a family affair, as he is owned by Wendy Hendriks, trained by her son Ricky and ridden by her grandson McLane, and he has already won once in an unrecognized timber race at Willowdale on Oct. 17.

SHEPPARD, who has 10 horses entered at Calloway Gardens, is currently leading by two races in Trainer, Races Won over Jack Fisher, and Sheppard would set a record by earning Leading Trainer title in each of the past six decades should he end up in the lead after the final meet at Charleston on Nov. 15.

The featured race, the $25,000Ratings Handicap hurdle, is also one of the most competitive races of the day.

Fisher is sending out Branbakescookies and Our Legend, both of whom have won twice over hurdles, against A Silent Play and Sportswear from Sheppard and Bodes Well, trained by Leslie Young.

All of Sheppard's entries are competitive in their respective races, from Codrington College in the $7,500 Apprentice Timber, who is up against a small be very competitive field of Office Sydney and Cheers to us from hendriks and Pured It, trained by Kathy Neilson.

In the $20,000 Apprentice Timber, Sheppard has Baltimore Bucko and Another try, with Sanna Neilson saddling He'll Do.

The $15,000 Miden Claiming hurdle was split in two, with eight entered in both the first and second sections, and the final race on the card is a $7,500 Apprentice Hurdle, which pits cousins Parker Hendriks, on Sheppard's Hepcat against Skylar McKenna on her mother Kathy Neilson's Adjutant.