THE PLAINS, Va.--Jack Fisher and Jonathan Sheppard, tied at the top in Trainer, Races Won, each have multiple entries in the International Gold Cup on Saturday, Oct. 24. 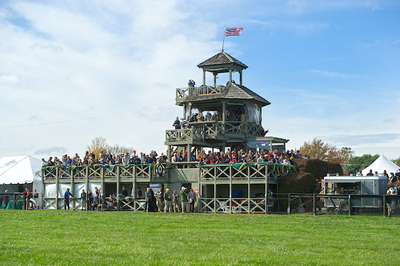 The crowded stands at last year's International Gold CupThe races will be live streamed, aand viewers can tune in to http://nsa.network.video/ to watch the races.

Fisher has eight entries in five of the eight races over fences while Sheppard has 12 entries in seven races.

But also entered is Rebecca Shepherd's Curve of Stones, trained by David Bourke, who won two weeks ago at the Virginia Fall Races

SHEPPARD has four entered in the $30,000 Ratings Handicap Hurdle, including Irvin Naylor's A Silent Player (Ire), but Fisher has two, including Brianbakescookies, who won at the Virginia Fall Races.

The International Gold Cup will be held with limited people on-site—participants and essential personnel only.

“We’ve worked closely with the National Steeplechase Association and Virginia Equine Alliance to be able to successfully run the Virginia Gold Cup this past June and it was successful. They are now assisting us in running the International Gold Cup,” said Dr. William Allison, co-chairman of the Virginia Gold Cup Association. “It will be a bittersweet day without our loyal fans in attendance, but ultimately being able to host race day is a victory for us. We are hopeful racegoers will tune into the livestream.”

The equine industry is important to Virginia’s economy.

A 2018/19 report by the Virginia Department of Agriculture and Consumer Services reported that the horse industry brings more than $2 billion annually in economic development to the Commonwealth.

The report noted that there are more than 183,643 horses in the state that provide approximately 38,874 jobs.

It also stated that there are 30.5 percent or one million households that contain horse enthusiasts.

“The viability of the horse industry is an important component for the Commonwealth’s economy,” Allison said.