Jack Fisher wins another at Saratoga, this time with Fast Car

SARATOGA, N.Y.--Jack Fisher saddled his third winner in a row at Saratoga on July 29 when Robert LaPenta's Fast Car swept to the lead coming into the stretch and opened to win by 6 1//2 lengths under Mikey Mitchell. 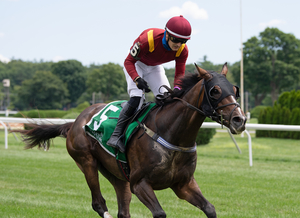 Fast Car is geared down to the wire for the win at Saratoga (Photo by Tod Marks)Rosbrian Farm's Global Freedom, trained by Ricky Hendriks was second and  Sherry Fenwick's Anticipating, trained by Jonathan Sheppard, faded to third after leading for most of the  $48,000. 2 1/16 mile Hurdle Allowance.

Fast Car, a 4-year-old by Varrazano out of an Unbridled's Song mare, was a $625,000 purchase at the Keeneland September Yearling Sales in 2017 but didn't show any speed on the flat.

"Jonathan Thomas sent him to me in March of last year," said Fisher while driving back from Saratoga after Fast Car's win. "As a 3-year-old, he was very immature."

"I ran him in a flat race at Colonial Downs (in September last year) just because he needed a race," said Fisher. "He won, but he didn't learn anything."

Fisher ran him twice more in 2019, this time over fences, where he finished fourth and then third and brought him back this year at Middleburg, where he was fifth, and then at Great Meadow on June 27 where he won a Maiden Special Weight over hurdles.

LaPENTA is a big owner of top horses on the flat, but this is his first steeplechase horse.

Asked if LaPenta enjoyed having a steeplechase horse, Fisher said, "I've never talked to the man."

LaPenta was not in Saratoga for the steeplechase race, but Fisher said that, although owners are allowed at the track to watch their horse run, very few actually go as they are not allowed in the stands but have to stand on the tarmac where it's hard to see much.

Although Fast Car won easily in Saratoga, Fisher said that again he didn't learn anything.

"That becomes a problem when they move up in class and have to run against horses that have learned something," said Fisher.

Fisher said he would probably run Fast Car back in a ovice race next time out.