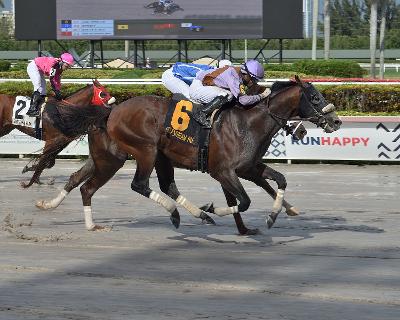 Just Whistle winning the Sunday Silence Stakes (Photo by Adam Coglianese)"Finally," said Matz. "He is one of those hard luck horses. He's has a series of little things bothering him."

This was Just Whistle's first stakes win, although he has finished  in the money a couple of times, placing second in the G3 Hal's Hope Stakes at Gulfstream on March 28. placing second in the Carl Hanford Memorial Stakes at Delaware Park on July 2, 2019 and third in the G3 Peter Pan Stakes at Belmont Park on May 12, 2018.But after an allowance race at Belmont on June 9, 2018 in which he did not finish, he didn't run again until February, 2019, and then after the second in the Delaware Stakes last July, he didn't start again until February, 2020.

"He had bone bruising," said Matz. "It took a long time to bring him  back. Hopefully, now that he's 5, that will take care of that."

"I don't have any plans for him to run again right now," said Matz. "I'll probably ship him back up to Fair Hill this weekend. Then we'll see what races we have to look at. I got a text this morning that Laurel may open this weekend. Horses stable in Maryland can ship  into Laurel to race."

MATZ SAID that he hasn't lost any owners because of their horses not being able to race due to the covid 18 shut-down.

Many trainers are worried that, due to the shut-down,, owners wouldn't be able to afford to keep their horses in training without any hope of winning back some money in races.

"I've been lucky with all my owners," said Matz. "Everybody has been good about it. Everybody is in the same boat."

"That's why we stayed in Florida," Matz said."Hopefully things will get better soon in Pennsylvania and Delaware."

"I probably will leave to drive North Wednesday or Thursday," said Matz. "I'll open the barnat Fair Hill. My assistant trainer will stay down here with a couple of horses that we have  penciled in to run down here."

Running second early, Cat's Pajamas made a bid for the lead turning into the stretch and drew off to win by 2 lengths. 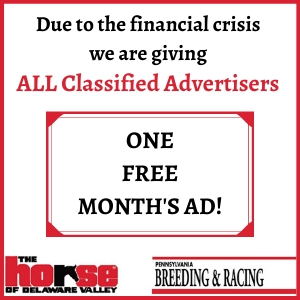 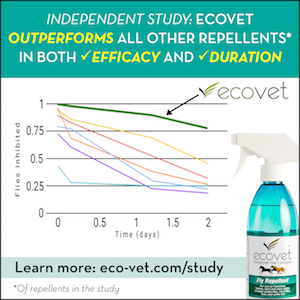