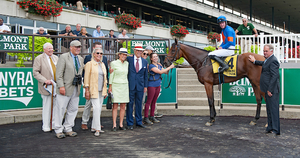 Owned by the Sideways Syndicate, Jury Duty was trained to his New Jersey victory by leading Irish horseman Gordon Elliott.

Topping the owner list by a wide margin was Rosbrian Farm, which earned $712,050 from 54 starts.

OWNED BY Mandy and George Mahoney, the stable had 14 victories, including two G1 wins—the $200,000 Calvin Houghland Iroquois and Belmont Park’s $175,000 Lonesome Glory Handicap—by Zanjabeel, who is owned by Rosbrian in partnership with Wendy and Ben Griswold’s Meadow Run Farm.

Trained by Ricky Hendriks, Zanjabeel will be a leading candidate for the Eclipse Award with earnings of $265,500.

Optimus Prime, Zanjabeel, and Jury Duty are the finalists for the 2018 Eclipse Award, which will be announced on Jan. 24 at Gulfstream Park.

Rosbrian was represented by one champion, Caldbeck, who won the 3-year-old title with Far Hills’ $50,000 Gladstone Stakes and then locked up the title with a victory at the Steeplechase at Charleston on Nov. 11.

Also trained by Hendriks, Caldbeck had earnings of $45,000 from his two U.S. starts over fences. 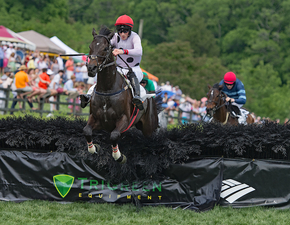 Trained by Richard Valentine, she also finished second in the $50,000 Iris Coggins Memorial at the Fair Hill Races.

Trained by Jack Fisher, the Doc also won the Willowdale Steeplechase and the Genesee Valley Hunt Cup for the second year in a row and added a win in Shawan Downs’ Legacy Chase.

Jack Fisher picked up his seventh straight title when he moved to the top of the list over Hendriks on the next to last weekend of the season.

He won 22 races, one more than Hendriks.

Fisher had purse earnings of $983,850 and was the top trainer by purses for the fifth straight year, while Hendriks also finished second in that category, $50,100 behind Fisher.

Reigning champion jockey Darren Nagle made his usual autumn surge and took down the wins title with a victory at Charleston.

He had 17 wins, one more than Jack Doyle, who had led the standings from the first day of the season.

Ross Geraghty, the champion jockey in 2012 by wins and purses, claimed his second earnings title with $716,100, his best season by earnings.

He rode Zanjabeel to victory in the Calvin Houghland Iroquois and was the regular rider for Optimus Prime, Caldbeck, and Wendy Hendriks’ multiple stakes winner Surprising Soul, among others.

Eric Poretz, who rode Irv Crawford’s Senior Senator to their second victory in the Maryland Hunt Cup, was the leading apprentice jockey as well as the year’s champion amateur jockey.

The Maryland resident had eight wins for the season, placing him sixth on the leader board by victories.

Recipients of the Woodville Award, presented annually by Hall of Fame trainer Janet Elliot, were Ashton Williams from the Joe Davies stable and Reggie Williams from Jimmy Day’s stable.

The Woodville Award honors the unsung workers whose dedication and diligence are essential to steeplechase racing.