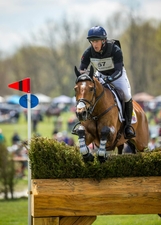 Oliver Townend, Great Britain, and Cooley Master Class on their way to winning the 2018 Kentucky Three-Day Event (Photo by
Anthony Trollope/ Red Bay Group)The Fair Hill Three Day Event in Fair Hill, Md., has also applied for five-star standing, but as of yet has not been granted that elite position.

The new status for the Kentucky Event, along with its respective requirements and rules, will take effect Jan. 1, 2019, and the 2019 CCU5* Event will be competed at the Kentucky Horse Park, April 25-28.

Now in its 41st year, the Kentucky Event is a thrilling competition featuring Olympic-level riders and horses from across the nation and around the world in what can best be described as an equestrian triathlon.

Since 1998, the event has been a Four Star event - the pinnacle of the FEI's system and on par with the Olympics - one of only six annual Four Star three-day events in the world, and the only one in the Western Hemisphere.

The proposition to alter the star system, accepted at the FEI General Assembly in 2017 but not effective until 2019, states that CCI competitions will now be referred to as CCI-L (for long) while CIC competitions will become CCI-S (for short).

KENTUCKY will now be one of only six annual Five Star three-day events in the world along with Badminton and Burghley in England; Luhmuhlen in Germany; Pau in France; and Adelaide in Australia and remains the only one in the Western Hemisphere.

"It's an honor to be recognized by the FEI as one of the world's elite events with the new Five Star status," said Stewart Perry, president of Equestrian Events, Inc., organizer of the Kentucky Three-Day Event. "It solidifies our longstanding position as one of the world's leading equestrian events. A distinction we work hard to deliver on every year."

The Kentucky Three-Day Event is a multi-day highly-competitive event in which the world's best horses and riders vie for their share of $400,000 in prize money, as well as a shot at the $350,000 Rolex Grand Slam of Eventing, which is awarded to any rider who wins the Kentucky, Badminton and Burghley Five Star Events in succession.

As the nation's premier event, it also serves as the USEF National CCI5*-L Championship for the American riders.