THE PLAINS, Va.--The stewards' report on the International Gold Cup at Great Meadows commented that two horses pulled up lame and one horse had to be euthanized and concluded that greater attention needed to be paid to the repair of the course. 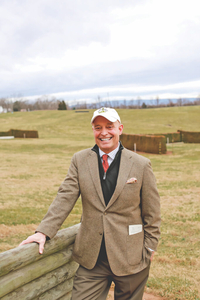 Al GriffinNational Steeplechase Association President Alfred C. Griffin Jr., who is also the co-chairman of the International Gold Cup, admitted that the course repairs "weren't adequately addressed," but pointed out that the Gold Cup rents from the Great Meadows Foundation.

"For several years, I've been asking for better maintenance," said Griffin. "Great Meadows has had four different people in charge over the last five years. They've been in financial trouble."

But Griffin said that Great Meadows now has someone in charge who is familiar with steeplechasing and its needs and requirements and that he is hopeful that the grounds would soon be back in top condition.

"Mike Smith has taken over the grounds," said Griffin. "He is also a steeplechase owner. We've had several meetings the last few weeks."

Griffin said that they have a list of needed equipment that will cost $350,000.

"We will try to help raise funds," said Griffin.

"ON SEPTEMBER 25th Larry Curtis and Tad Zimmerman walked the course with Al Griffin," the Stewards Report said. "It was agreed that while much of the damage from the very wet ground at the Spring races had been remediated, there was still rough ground on both turns that should be addressed before the fall meeting. When all three Stewards walked the course on Friday before the races a number of rough spots were discovered under the thick turf and flagged for repair but it was clear that the rough ground had not been adequately addressed since the first course walk and the course had not been irrigated. The Clerk of the Course did not attend either course walk or the races.

Several trainers and riders expressed to the Stewards their unhappiness with the hard and rough ground and with the published course inspection report which they characterized as less than accurate in regard to the smoothness of the course.

Given the short fields, the number of horses who came up lame and vehemently critical comments from horsemen, greater attention needs to be paid to the repair and preparation of the racing surface if Great Meadows is to restore its reputation as a premier venue."

"We walked the course the day before the races and we found holes," said Griffin. "They were repaired. They (Great Meadow) didn't irrigate the course. In the past the Gold Cup course had been one of the best maintained. That's a fall from grace. But now that we have Mike Smith and a new irrigation system it will be better."

Carrington Holdings' Hurtgen Forest, trained by Arch Kingsley, suffered aright front condylar fracture on the first turn and was euthanized on the course.

"Hurtgen Forest was a very sound horse," said Kingsley, adding that he had never had any soundness issues at all. "I heard from many jockeys that the course was in rough shape and very hard."

Ultimately, it is up to the trainers to pull their horses out of a race if they feel the conditions might be dangerous.

But that is a very difficult thing for a trainer to do, particularly if other trainers are running their horses.

The trainer has to validate his reasons to his owners, and with limited numbers of races available to steeplechase owners, if a trainer pulled his horses out and races went off without problems or maybe just one or two horses pulling up lame, owners could reasonably be quite upset.

Trainers are in a tough position when it comes to validating a course's condition.