FAIR HILL, Md.--Oliver Townend of Great Britain, ranked #1 on the FEI Eventing World Athlete Rankings, is entered to compete in the Maryland 5 Star at Fair Hill on Oct. 13-16. 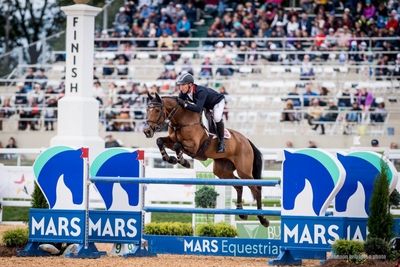 The Maryland 5 Star is one of only two 5 Star level equestrian events of its kind in the United States and just the seventh worldwide, and the event made a spectacular debut last year, welcoming a total of 20,886 spectators and 184 competitors that featured four of the top eight eventers in the world.

In addition to the 5 Star competition (CCI5*-L), the event also features a 3 Star competition (CCI3*-L), which serves as the USEF CCI3*-L Eventing National Championship, and the Young Event Horse East Coast Championships. The four days of eventing competition feature Dressage on Thursday and Friday), Cross-Country on Saturday over Ian Stark-designed courses, and Show Jumping on Sunday..

“I’M EXCITED to be returning to the U.S. for the Maryland 5 Star,” Townend said. “I thoroughly enjoyed the event last year and maybe I can move up a notch this time!”

“It was incredibly exciting to have Oliver Townend with us last year, and I think his choosing to return this year is a real testament to our event,” said Jeff Newman, President & CEO of the Maryland 5 Star Event Committee. “Our entry list features 188 horses and many of the sport’s top riders; there will be lots of excitement in the air!”

Tickets for the Maryland 5 Star at Fair Hill are available at Maryland5Star.us/tickets.

A variety of single and multi-day ticket packages along with exclusive Club and VIP Hospitality packages, General Admission tickets starting at just $15 and much more are available.

Reserved Tailgate spots right next to the dynamic Cross-Country action are available.

Fans are encouraged to follow the event on social media @maryland5star and/or sign up to receive the event e-newsletter for all the latest news and information at maryland5star.us/newsletter-sign-up/, including details on this year’s new additions.