The Horse received this in an email from "truckparts19311".

I think they would want this information.

We in Chester County are mourning his loss.

I have 3 Nokota horses in Elk Township, 2 that he bred.

All 3 of mine were ridden in the county and beyond and my horses were trained, competed and loved by many local riders.

I hope you will use your news media to notify our community of this loss.

Leo visited Chester County on many occasions bringing loads of his horses with him, so there are many of them still here including mine.

Friends and family are mourning the loss of a rural North Dakota horseman who dedicated his life to preserving the Nokota breed. 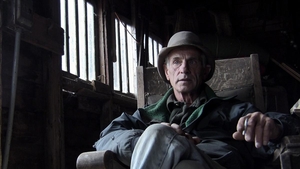 Leo KuntzLeo Kuntz, a founder of the Nokota Horse Conservancy, died Sunday at Sanford Health in Bismarck at age 69.

Kuntz, of Linton, had been hospitalized since Aug. 2 after he was injured in an accident on a four-wheeler while returning from a pasture, said his brother, Frank Kuntz.

“We lost a lot here,” Frank Kuntz said Wednesday. “We lost a horseman, we lost a brother, we lost a friend, we lost somebody who had passion for these horses.”

Frank Kuntz said his brother had the vision more than 30 years ago to preserve the horses that promoters believe are descendants of horses owned by the Plains Indians. There were less than 200 of the breed now known as Nokota when the brothers got involved, and today there are more than 800 worldwide, Frank Kuntz said.

“THESE HORSES now have a future because of what he saw many, many years ago,” he said.

Castle McLaughlin, curator of North American Ethnography at Harvard's Peabody Museum of Archaeology and Ethnology, met the brothers in 1986 at a sale of wild horses rounded up from Theodore Roosevelt National Park. She later worked with Leo Kuntz and rancher Tom Tescher while researching the origin of the park horses. 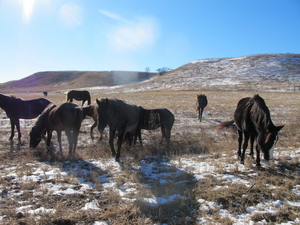 Nakota horses grazing“There’s a definite link to the Lakota horses,” she said.

McLaughlin credits Leo Kuntz with starting a community of people around the world with a passion for Nokota horses.

“That’s the community that's in mourning for Leo,” she said. “It’s not often that you meet somebody that has such a deep passion and integrity and they’re willing to sacrifice everything for a dream.”

Leo Kuntz, born and raised in Linton, was injured in the Vietnam War and returned somewhat disillusioned, McLaughlin said.

“The horses were kind of what saved him and gave him something to believe in,” she said.

His story was featured in the documentary film “NokotaHeart” in 2011, which won several awards at film festivals.

“Leo and Frank didn’t have many resources or money, so they kind of did everything themselves and the old-fashioned way,” she said. 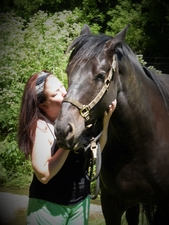 Heather Bradway, Marketing Manager of The Horse, with a Nakota (Photo by Ginny Jenkins)In 1993, the North Dakota Legislature designated the Nokota horse as the state’s honorary equine. “The Nokota breed may well be those distinct horses descended from Sioux Chief Sitting Bull’s war ponies,” reads the North Dakota Blue Book.

The National Park Service has not recognized the historical link. The Theodore Roosevelt National Park superintendent told the Associated Press in 2007 that it is impossible to prove the Nokota theory because samples of horse genetics from pre-settler days do not exist.

The name Nokota is a federally registered trademark. The Nokota Horse Conservancy, a nonprofit Leo Kuntz helped found in 1999, is a nonprofit dedicated to preserving the breed.

In addition to the historical links, the Nokota breed is loved for other characteristics, Frank Kuntz said.

“They’re very, very intelligent, very hearty, very surefooted, athletic, very versatile, smart and compassionate,” he said. “Everybody in the horse world is looking for horses like that.”

Leo Kuntz owned about 180 Nokota horses at the time of his death, his brother said. The family is grateful for relatives and friends who have stepped up to help take care of the horses.

“My main concern right now with his passing is to make sure we keep in tact some of the more important genetic blood lines that he has out there,” Frank Kuntz said.

Because family members and friends are scattered around the country, the family plans to schedule a memorial service in the coming weeks. The service date will be posted at www.nokotahorse.org.