WEST GROVE, Pa.--Two of the three riders named to the U.S. Eventing Team for the Tokyo Olympics, Phillip Dutton of West Grove and Boyd Martin of Cochranville, are from Chester County. 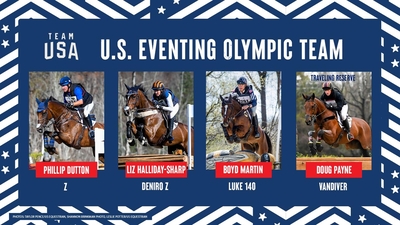 Both are Olympic veterans, and Dutton won two team gold medals while competing for his homeland Australia in 1996 Atlanta and 2000 Sydney Games and won an individual bronze medal in Rio competing for the U.S. while Martin was a member of the U.S. Eventing Team at the last two Olympics.

Martin has been named with two reserve horses, and Elizabeth Hallida-Sharp is the third member of the Tokyo team.

The team will be led by Chef d’Equipe Erik Duvander and Team Leader Jenni Autry.

Competition will begin July 30 and continue through Aug. 2 at the Equestrian Park and Sea Forest Cross-Country Course venues.

THE THREE combinations will compete as a team with one traveling reserve.

Two direct reserves have been named alongside six alternate combinations.

“I believe we have a competitive team to represent the U.S. in Tokyo. All the horses have had a little break, and we will now be working to improve some details we identified at the Kentucky Three-Day Event CCI5*-L and Jersey Fresh CCI4*-L before we head to the team’s Mandatory Outing at Great Meadow in Virginia,”said Chef d’Equipe Erik Duvander. “Following that outing, we travel to our Pre-Export Quarantine in Aachen, Germany. This is a great facility and will function as our final training camp where we will be working with dressage judges and have Peter Wylde working with us on the show jumping. This is a very focused group of athletes who are committed to delivering a top performance in Tokyo.”

The following athlete-and-horse combinations will represent the United States at the Olympic Games Tokyo 2020 and are listed in alphabetical order:

Boyd Martin of Cochranville, Pa., and Luke 140, a 10-year-old Holsteiner gelding owned by The Luke 140 Syndicate

The following combination has been named as the traveling reserve:

The following combinations have been named as team alternatives and are listed in selected order:

Third Alternate: Will Coleman of Gordonsville, Va., and Off The Record, a 12-year-old Irish Sport Horse gelding owned by the Off The Record Syndicate

The Team will hold a mandatory training session at Great Meadow in The Plains, Va., from Wednesday, June 30, through Friday, July 2.

The training session will feature at maximum 15 athlete-and-horse combinations, including the three combinations currently named to the U.S. Eventing Olympic Team, direct reserve and traveling reserve combinations, as well as the six alternate combinations and a limited number of other international combinations.

Show jumping will begin at 10:00 a.m. on Friday, July 2 for all participating combinations.

This event will not be open to public spectators and will not be livestreamed, but media attendance and coverage is encouraged.