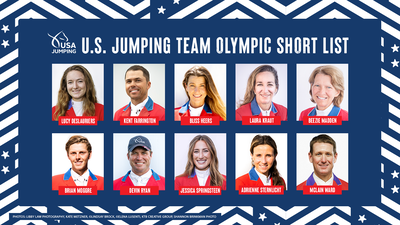 But there are also terrific, up-and-coming youngsters like Brian Moggre and Lucy Deslauriers as well as Jessie Springsteen and Bliss Heers on the list. so chef d'equipe Robert Ridland has a great list to choose from but also a hard job in deciding which of these stars will have to miss the Olympics.

US Equestrian announced the 10 athletes who have been selected to the U.S. Jumping Team Olympic Short List for continued observation ahead of team selection for the Tokyo 2020 Olympic Games later this summer.

THE FOLLOWING athletes and horses have been selected to the U.S. Jumping Team Olympic Short List and are listed in alphabetical order:

Final team selection will be announced by July 5, 2021.

All nominations to the 2020 U.S. Olympic Team are subject to approval by the United States Olympic & Paralympic Committee.