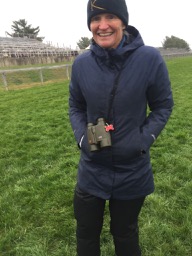 Sanna Neilson, one of Cheishire's MastersDr. Fisher is on staff at A.I. DuPont Hospital for Children in Wilmington, Del.

She is a pediatric anesthesiologist and is married to Dr. Rush Fisher.

She began riding as a toddler.

Her foxhunting career began soon after on foot with Little Prospect Hounds in Montgomery County.

Her first taste of hunting with Cheshire was at age 13.

When she and Rush were dating, they hunted here, where Rush grew up hunting, as often as possible.

She says it is thanks to her “wonderful and generous in-laws,” Dolly and Dr. Johnny Fisher, that she fell in love with hunting with Cheshire.

The Fishers mounted her on the best horses who taught her to jump this hunting country’s iconic post-and-rails.

WHEN THEY moved to Unionville in 1998, they became regulars in the Field.

All four of their children – Lydia, Jack, Buzz and Phoebe - grew up hunting with their parents.

When Phoebe’s mother Phoebe Driscoll moved to the area, she also hunted, so there would often be three generations of Phoebes hunting together!

If there ever was an award for the most enthusiastic Cheshire volunteer, Phoebe would win it every year.

She is one of the most passionate foxhunters we have and always steps up to do whatever needs doing.

Thank you, Phoebe, for taking on this role. We cannot imagine anyone better suited to join the team with Sanna Neison and Dixon Stroud.