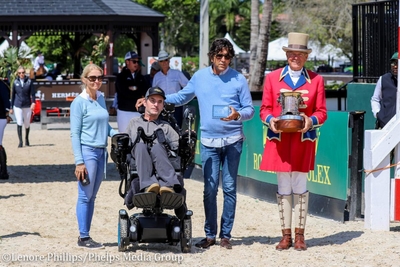 Dianna and Kevin Babington with M. Michael MellerThe award is given to the international equestrian who exemplifies the best style of riding along with maintaining a sportsmanlike composure during in the CSIO4* at WEF during Nations Cup week.

Presented in memory of Kate Nash Boone, the award is a way to honor the memory of Boone's support and love of 'all things equestrian.'

In August of 2019, Babington suffered a spinal cord injury during a competition, and while he is currently paralyzed, he is working diligently to recover while continuing to support the sport of show jumping.

ORIGINALLY from Tipperary Ireland, Babington has successfully taken part in many major competitions, including the Olympics, World Equestrian Games, and European Championships.

"I was humbled and honored to present that award to Kevin," said M. Michael Meller, who presented the award. "He is a true inspiration to all of us. There are very few times in your life that you come across someone with that much determination and that much strength. It is incredibly impressive to see what he has gone through and what he is doing to keep going. Kevin is such a kind and genuine person who is a true gift to our industry and I am so proud to call him my friend."

At the end of 2019, the Kevin Babington Foundation (KBF) was created to provide funding and support for Babington's rehabilitation.

The KBF also focuses on education in safety for riders involved with jumpers, hunters and equitation.