HARRISBURG, Pa.--A new fireworks law passed in 2017 that allows anyone in Pennsylvania to buy and set off commercial size fireworks has caused at least one barn fire, set neighbors bushes on fire, traumatized veterans with PTSD and caused huge problems for horse and dog owners. 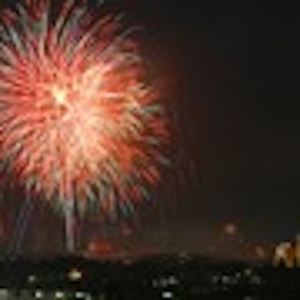 Fireworks set off in a field adjacent to a horse farmIn 2017, language was added in Act 43 that legalized consumer-grade fireworks including aerial devices like bottle rockets and roman candles, as well as powerful firecrackers containing up to 50 milligrams of explosive material. Previously, Pennsylvania law only allowed sparklers and non-airborne novelties.

He said communities across the commonwealth have seen a skyrocketing number of complaints since the legalization of larger and more powerful fireworks has taken effect.

In 2018, the US Consumer Product Safety Commission estimated 9,100 fireworks-related, emergency department-treated injuries, with 62 percent of them occurring during the month surrounding the Fourth of July.

THE FIRST bill calls for:

Increasing the distance from an occupied structure, veterans facility, agricultural livestock building or dog kennel for using consumer fireworks from 150 ft. to 500 ft.
Increasing penalties for violations from $100 to $1000 and increasing the offense to a misdemeanor.
Limiting the use of consumer-grade fireworks on private property to specific times of day/year.
Requiring reporting of emergency and fire incidents related to fireworks for collection in a database that can be referenced and utilized by all first responder disciplines.
Providing the option to set local regulations for consumer fireworks. 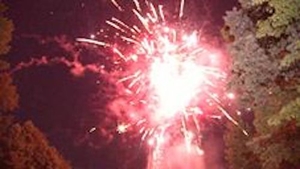 More fireworks set off near horse farmsBut horse owners interviewed fear that, because of the huge revenues raised by the fireworks tax, a bill changing that law has no chance of passing, and even if it did it's not strong enough and not enforceable.

An article in the Patriot News of Harrisburg stated that according to the state Department of Revenue, the fireworks tax generated $3.5 million in the first two quarters of 2018. That doesn't include July 4th sales, which are peak season for fireworks sales.

The sales tax in July alone from fireworks purchases produced just shy of $5 million, which is more than the $4.1 million collected for those purchases in all of 2017-18, according to figures provided by the revenue department.

Judy Szela of Quakertown submitted a  letter the public hearing that was held Sept. 24 in Harrisburg that included a video of fireworks landing feet away from her barn and even hitting her.

A number of videos of dangerous commercial sized fireworks like those set off at Longwood Gardens can be seen on the Facebook page Ban Backyard Fireworks.

"Two days before Halloween, on a week night evening, someone set off fireworks for 45 minutes," said Walsh. "My horses are eventers, so nothing bothers them, but I've had dogs in life threatening situations. I've had two dogs that had to be sedated. My older dog had a heart condition, so I had to knock him out with Ace, but when people set off fireworks year round, not just on holidays, you can't know to sedate in advance."

"I got an email from someone who had to put an older horse down after he broke through his stall door," said Walsh.

Laurie Sack's  barn on fireLaurie Sacks' barn burned down in Bucks County, but luckily here were no horses in it at the time.

"A neighbor who can see our barn said the the fireworks started about 15 minutes before the barn burned down," said Sacks. "The police came two days after the barn burned and said the fire was caused by spontaneous combustion of hay, but I hadn't put in any new hay in months, and the hay that was there had at least 12 inches around it to allow for air flow."

Susan Moons, also in Bucks County, had a horse severely injured due to fireworks.

"On Labor Day, I had a close neighbor set off loud fireworks," said Moons. "It sounded like machine guns in our stone house. When I went outside, I found one of our horses had panicked and was loose. He had a pretty bad laceration on his hind leg." 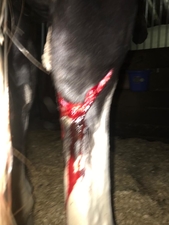 A deep gash onSusan Moons' injured horse"I called the vet, and he sewed him up and said he had to have six weeks stall rest," said Moons. "He's a valuable horse. This had a huge economic impact. If we'd had notification that our neighbor was going to set off fireworks, this could have been avoided. I could have put the horses in the barn. I wrote a letter to our neighbor, but I haven't heard back."

"I reported this to the police, but they said the neighbor told them he hadn't been setting off fireworks," said Moons. "I'm hearing that the new law restricting fireworks isn't enforceable. We need stronger laws than what has been proposed."

Samantha Brok-Potts, yet another in Bucks County,has a young, healthy mare in foal that died during a night of fireworks.

"She was fine when I fed her the night before," said Brok-Potts. "The next morning, I found her dead. Neighbors had been setting off huge fireworks. She probably died of a heart attack due to panic. We raise thoroughbreds. We've had a lot of young horses injured because  of fireworks."

Susa Pizzini, who lives near Fair Hill but in Chester County, has a next door neighbor who sets off commercial sized fireworks in the field next to her.

"The horses totally freak out," said Pizzini. "I'm afraid one of them is going to break a leg or break through the fence and get on the road. We're near Route 472. It's a frightening situation."

"I have one neighbor who puts ear plugs in her horses ears and also drugs them, and she's offered to drug mine during the fireworks," said Pizzini.

Kris Meyer of Jamison, Pa., has seven horses and dogs, and she said that she and her husband have to be home before 7 every evening to be with their animals lest fireworks start.

"One of us stays in the house with the dogs and the other stays in the barn with the horses," said Meyer. "You never know when people are going to set off fireworks.

"Even when it's 90 degrees, we have to shut the barn up completely," said Meyer. "We have fans on, but it gets very hot. I told the police, and they said, `Why don't you air condition the barn.'"

"One person set off a rocket that landed in my ring, 15 feet from the barn," said Meyer. "I have one horse that we keep in a double stall that's 25 feet. He was catering in his stall."

A barn near Pittsburgh burned down Labor Day weekend, killing five horses and a pig.