with photos of Michael Barisone and Lauren Kanerek flanking the headline. 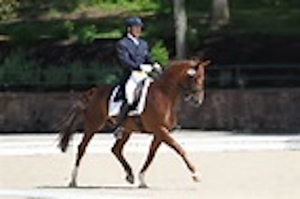 Michael BarisoneThe story on pages 6 and 7 begins "A former US dressage Olympian shot an award-winning equestrian on the grounds of his ritzy, 53-acre New Jersey sprawl — days after she wrote online that her life had been threatened, authorities said Thursday.

The attack came just days after Kanarek, 38, posted on Facebook that she had reason to fear for her safety.

“A CERTAIN known drunk has literally just informed me ‘sleep with one eye open,’ ” wrote Kanarek on Aug. 2 in one of several recent posts on the site expressing a sense of peril.

None of the messages mentions Barisone, 54, by name, but on Thursday, the former international dressage competitor was charged with attempted murder and weapons possession, officials said."

The story continued after a description of Marisone.

"He also operates Barisone Dressage training facility on the Long Valley farm — which sits 11 miles from the US equestrian team’s headquarters in Gladstone, NJ.

According to her social media posts, Kanarek both rented a home with her fiancé and quartered horses at Hawthorne Farm — an arrangement neighbors and sources said Barisone was seeking to end.

“There was a big red sign in front saying ‘eviction,’ ” said neighbor Bob Jenkins, 66. “He was trying to get them out.”

Police sources said that cops had been called to the farm at least a half-dozen times in the week leading up to the shooting but that tensions finally came to a head around 2:15 p.m. on Wednesday.

Barisone confronted Kanarek and her fiancé on the back porch of a farmhouse and, after a brief exchange of heated words, allegedly drew his gun, sources said. “There was a very short verbal confrontation,” said one police source. “He didn’t say, ‘I’m going for my gun.’ He just went for it. He came, [and] he knew what he was going to do.”

Kanarek has stabalized after surgery, and Barisone was arrested by Wahington township police.