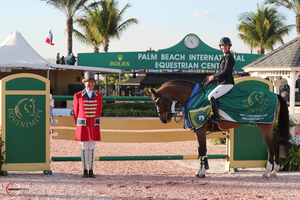 Lauren Hough on Valinski (Photo by Sportfot)A starting field of 100 entries faced off in the Challenge Cup, with 15 advancing to jump off over the Oscar Soberon designed short course.

As the sixth pair to return for the jump-off, Hough and Valinski S tripped the timers in an unbeatable clear round time of 38.812 seconds.

In clinching the win, Hough edged out fellow U.S. Olympic veteran McLain Ward, who finished in second place with a time of 39.449 seconds aboard Queen Jane, owned by Walstib Stables LLC.

Rounding out the top three with a time of 39.550 seconds were Alex Granato and Carlchen W, owned by Page Tredennick.

Kevin Babington of Gwynedd Valley, Pa., was fourth on Super Chilled in 39.926.

WHILE VALINSKI S, a 17-year-old KWPN gelding owned by Wyndmont, is a WEF veteran, having most recently been shown at the venue by Todd Minikus and Shawn Casady, the partnership with Hough is new.

“I rode him many years ago for just a couple months, but this is just my second week showing him,” said Hough. “Ronnie Beard and Michael Dorman, the owners, are very good friends, and they asked me back in the fall if I had time to ride some horses for them. I knew Valinski, and I’ve always loved him. He’s a veteran, and he knows his job. I was thrilled to be able to have the ride.”

“He’s a small horse, but I like small horses,” said Hough, who has ridden to great success aboard other notable small mounts including the 15.2-hand Ohlala. “He’s very careful and very fast. It makes my job quite easy.”

While Hough elected to forego an inside turn in the jump-off, Valinski S’s natural speed more than made up for it and secured them the win over the course that Hough cited as an “unbelievable job” from Mexican course designer Soberon.

“This is one of the most difficult weeks in my opinion because there’s a maximum height that the course designer can build but very, very good riders,” said Hough. “To end up with 15 clear is pretty much a perfect course. The time was a bit of a factor. I think for the first week FEI here, it was really a nice welcome for the young horses, for the older horses, for new riders.”