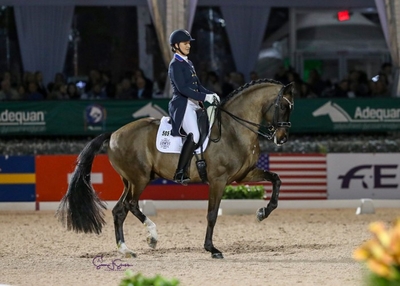 Adrienne Lyle on Salvino (Photo by Susan Stickle)The Freestyle had personal bests for the top three and a winning score of over 83 percent.

Lyle and the 16-year-old stallion Salvino won their second class of the week with 83.54 percent, having previously won Thursday’s qualifying Grand Prix with 77.5 percent.

In the freestyle, Sarah Tubman placed second on First Apple to begin her Wellington season with a personal best of 78.25 percent.

Third placed Caroline Darcourt of Sweden on Lord Django were competing in their first Grand Prix freestyle and scored 78.17 percent.

Lyle is aiming for one of three starting places allocated to North America for the FEI World Cup Final in Omaha, Neb., in April.

“I’m super thrilled to be here again at this amazing venue, and I was happy to see how packed it was despite this cold weather," said Lyle. "Salvino felt great. He was fiery and very excited to be here."

“WE DID MOST of the things on my terms, and some of the things on his terms, but like any good relationship it’s all about compromise, and he feels great,” said Lyle of Salvino, whom she rode on the silver medal USA team at the Tokyo Olympics. 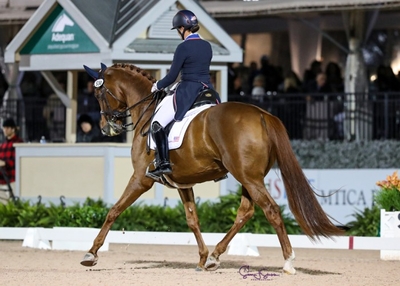 Sarah Tubman on First Apple (Photo by Susan Stickle)“We were fortunate to have the World Cup qualifier in December under our belt [which they won with 85.015 percent], so this was the second of three that we have to try and do,” said Lyle, who is 38. “He doesn’t do a whole lot in between shows; he knows his job now so we just keep him happy and healthy and fit.”

Tubman riding First Apple won individual and freestyle gold medals at small tour at the 2019 Pan American Games, and he is the first horse she has competed at international grand prix level.

“We have come a long way and we just continue to try to improve," said Tubman. "I’m learning a lot on a fabulous horse.”

“There’s really nothing like riding on our home turf with such a big crowd,” she said. “It’s a great, electric atmosphere and my horse absolutely loves the crowd and the energy that this ring brings. We need to practice with this kind of electricity, and it’s fun. We’re really lucky to have this facility seven minutes away from our stable.”

Swedish rider Caroline Darcourt was last to go and was riding a brand-new freestyle, and her score  dropped Anna Marek on Fire Fly to fourth place.

“I’m over the moon for this whole show,” said Darcourt, who broke the 70 percent barrier in the Grand Prix for the first time on ‘DJ’ the previous day. “He did his first freestyle tonight. We just made it this week and this result was more than I could have hoped for.”

Darcourt, who has worked for the class sponsor, Lövsta Stuteri, for 20 years, said, “The possibility to ride at shows like this so far from home and bring the horses is just amazing. My feeling with DJ is that he would love to do more freestyles.”

“Before we started the evening I wondered how this would turn out because suddenly it didn’t feel like we are in Florida,” said William Warren, the judge at C. “The temperature plummeted, and horses can be horses, so I didn’t know how things would go for the riders tonight, but they all pulled it off beautifully.”

“The consistency of the test today was the winning thing,” said Wandres. “He had not been out since August so he has had a bit of a break, but he came back very good and my feeling was strong."

“To start the season here in Wellington with a personal best is super and we are looking forward to what’s coming next,” said Wandres, who also had a personal best in week one’s “Friday Night Stars” at last year’s show on another of his Grand Prix horses, Bluetooth OLD.

Wandres has ridden Hot Hit at Hof Kasselmann, where he works, since the grey gelding was 6, and the now 12-year-old already has an impressive resume, and this victory took his unbeaten streak to five.

“We are very happy about him, he is our unicorn,” said Wandres. “It’s always good to have a white one in the stable. He’s in our hearts and I feel he gives his best in the arena.”

In the CDI1* FEI Intermediate I, the top four all scored better than 71 percent.

Susan Pape of Great Britain on Harmony’s V-Plus scored 72.941 percent to win  in the 9-year-old’s debut at the level.

“It was his first so I wasn’t really sure what was going to happen,” said the 61-year-old Pape, who is competing at AGDF for the eighth time. “His trot work is really good and he has a very good walk. The canter was maybe a little bit insecure because he didn’t really know what was going on, but he did everything so beautifully and really listened to me.”

The stallion was bought as a rising 5-year-old by Harmony Sporthorses from the PSI auction, and he now combines competing with stud duties.

Pape may try a middle tour test in the national ring before she leaves to go home to Germany in early March.