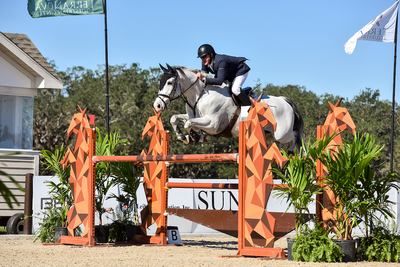 Scott Keach on Wild Thing (Photo by Eye Was Here Photography)Spectators viewed from a variety of lounge seating, purchased gourmet beverages at an open bar and enjoyed a full VIP experience complete with a deluxe catered brunch.

“It’s always a tough course to set in the first week of January because it is the first week of circuit and everyone is just getting warmed up,” said Worthington. “Factoring in that it is early in the season, we try to make it a nice track for everyone, and make it inviting for those that come down here but also a little bit of a challenge.”

Between rails and time faults, only four entries made up the returning jump-off lineup, and two of those clear rounds were from Keach.

FIFTEEN-YEAR-OLD Brooks Hull of Ocala, trained by Derek Petersen, was first on course and the first clean.

Keach on Cencorinue PS  and on Wild Thing with Kirk Webby of New Zealand on Kaira VD Middelstede rounded out the jump-off.

“Overall, I was very happy with the result,”said Worthington. “Four clear out of the 19 starters gave us a nice 25 percent clean-round rate. I was pleased with how the horses jumped and the footing here is absolutely amazing. It’s a hot track with fast footing so they could really gallop across the floor and turn quickly.”

Keach was next to return with his first qualifying mount but would settle for the third, stopping the timers at 43.045 seconds.

“Honestly, when Brooks went, I thought for sure he’d win the class,” Keach said of Hull’s jump-off.

But Keach, a medal-winning Olympian, had one final chance to win.

“Wild Thing felt good in the warm-up, so I just kept rolling,” he said. “The young fellow did nine strides to the last fence, and he knew he should've done eight strides. When I saw that he had to wait for the nine, I knew I could do eight to the final fence. That was probably the determining difference between the two of us and one of the advantages of going last.”