WELLINGTON, Fla.--Lebanon’s Jad Dana on After Eight won the $50,000 Grand Prix on Saturday, Dec. 17, over 34 competitors in the final opportunity to compete under the lights of the International Arena ahead of the 2023 Winter Equestrian Festival. 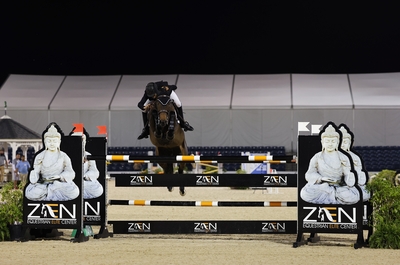 Jad Dana on After Eight (Photo by Naznic Photography)“I’ve been riding this mare for a little over a year and a half," said Dana. "She’s very special and very sensitive. The owners bought the mare and secured the ride for me, so I’m extremely grateful to them. She is very feisty and hot, but she knows when it’s her time to shine. She’s an experienced horse that knows her job.”

Five qualified for the jump-off, and Caroline Mawhinney on Bacara D’Archonfosse went first, going clean in 42.473 seconds, but her lead was short as Kayla Savard on Bogota Nantuel was clean in 41.116, taking the lead with three left to test the track.

Dana was the final to go and was clean in 38.749 seconds, taking the lead by nearly three seconds.

“My plan was to win, which we always plan for," said Dana. "Tonight, it went my way. I thought the course walked nicely. There were a few options here and there, but I know my mare pretty well now, and I know what strides to pick and what distances to take to bring the best jump out of her.”

Savard was second and Mawhinney was third.

THE SECOND Holiday Festival show began Thursday morning with the $5,000 Grand Prix Qualifier with 46 competitors, 18 of which were clean.

Sarah Scheiring on Margret De Mariposa was first, with Michael Hughes on Trixie Z, clean in 41.748 seconds, second and David O’Brien of Ireland on El Balou Old was third, clean in 45.745 seconds.

Placing second was Daniel Bluman of Israel on Corbie V.V.Z ET, clean in 37.840 seconds, and third was Harry Allen of Ireland on Over Lux, clean in 38.697 seconds.