WELLINGTON, Fla.--Brazilian Luiz Franciso De Azevedo on Collin won the $50,000 Dover Saddlery 1.50m Classic CSI4* over a field of 53 riders on Sunday, Dec.4 at the first of the ESP Holiday Series. 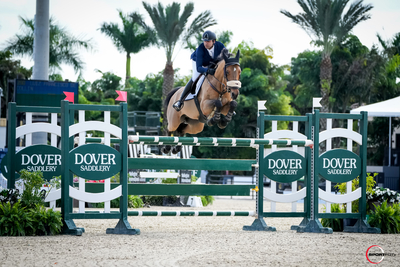 Luiz Franciso De Azevedo on Collin (Photo by Sportfot)“When the first round was done, I saw there were 14 heading into the jump-off and I knew I would have to take a risk," said Azevedo. "I was lucky enough to have two horses in it, the other one is an 8-year-old of mine, but I knew the principal horse to win the class would be Collin. We tried our best and the risk paid off. Funny enough, Collin won this class last year, so this win is really special for us. He is a really special horse for me and for my team. He’s 15 years old now, he’s been competing with us for 10 years, and he’s always given me his best. I’m really happy.”

Luiz and Collin completed the jump-off clean, with a time of 36.95 seconds.

Irelan's Harry Allen on Calculatus placed second with a clean round in 37.39 seconds, and young Canadian Sam Walker on Evita was third, clean in 37.41 seconds.

AZEVEDO said of the new improvements to the grounds, “It’s getting better and better. I think it’s really important for us to have that quality of stalls. Now, we are waiting for the rest to come and hope to eventually have all the stalls like this. It’s really important for the horses, for the grooms, and for us. I do feel that this is the best place in the world to be competing; it’s my home, so it’s the place I want to be and so I’m happy to see the improvements taking place.”

Twenty-two competed over the twelve obstacle course in the first round, designed by D’Ambrosio.

Carvalho was clean in the jump-off in a time of 39.902 seconds, with Carly Anthony on Heavenly W placing second, clean in 40.448 seconds, and  Catherine Pasmore on Cinnamo placing third with a clear time of 42.352 seconds.

Sunday morning kicked off with the $2,500 High Junior/Amateur Open Stake with 15 competitors.

Olivia Sweetnam, daughter of Irish Olympian Shane Sweetnam, on HDB Quality won the class with a double-clear round and a time of 29.536 seconds.