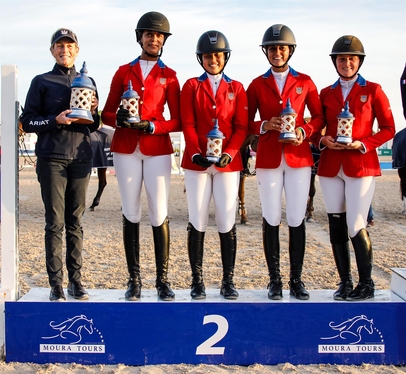 U..S team at Vilamoura Nations CupUnder the direction of Chef d’Equipe Anne Kursinski, the team of Kelly Arani on Impossible Dream, Cathleen Driscoll and Arome, Mimi Gochman on Celina BH, and Mavis Spencer on Carissimo 25, edged out 13 other teams to finish second behind the gold-medal team from France.

Driscoll, riding Arome, a 2010 Selle Français gelding owned by Plain Bay Farm, was first to go for the U.S. team in the first round of Sunday’s competition with a clean round.

Arani on Impossible Dream had a rail down over the final oxer and a single time fault to add 5 faults to the team’s score.

Spencer on Carissimo 25, third to go for the U.S. team, turned in another clear round.

Gochman riding Celina BH had one rail down at the second element of the triple combination, so the team, with 4 faults, was in a tie for first place with Brazil and France at the end of the first round.

In the second round of Sunday’s competition, both Spencer and Gochman turned in clear rounds.

SPENCER was one of only four combinations to complete both rounds with no faults.

With one drop score, the team added only 8 faults in the second round and held on to a second-place finish.

This was the team’s second outing together after the CSIO3* in Vejer de la Frontera, Spain, in October.

“They all put in great rounds today," said Kursinski. "I think they’ve come a long way since Vejer, getting that first one under their belts. They were all first-time 3* Nations Cup team members at Vejer, so I think everybody was a little more relaxed and confident today. They all rode very well. Their horses were great. It was extremely competitive because there were 14 teams that got to compete, and 10 got to come back for the second round, so it was very tough competition.

“It was a really wonderful, cohesive group, including the grooms and the trainers,” Kursinski said. “It was a wonderful, complete team effort, which is great to be part of.”

The FEI Nations Cup CSIO3* competitions serve as an important piece of the jumping pathway for riders with aspirations to represent their country at the highest level of the sport.

Kursinski says that all of the team members have impressive results nationally at the grand prix level, and some have had team experience as young riders, but team outings like Vilamoura are a step up.

“There’s just no substitute for this kind of experience,” said Kursinski. “When you’re a team member, it’s got a totally different feeling to it, whether you’re going first and you’ve got to show the way—Cat did a great job of that—or in the middle, or especially at the end for Mimi, and having that pressure of, ‘Can you bring home another clear round?’ You can only get that kind of team experience in the show ring. For our riders, we just don’t have the opportunity of jumping a lot of Nations Cups at home, whereas many of the Europeans do this as children and young riders.

“For riders who want to get on a Wellington team or one of Robert Ridland’s CSIO5* teams, you’ve got to get your feet wet in these three-stars,” Kursinski said. “The European experience is different. The warmup is different. Getting to the ring and starting is different. There are all these little things, and you can watch all the videos, but you have to come here and really experience it. So, if you want to get on the bigger teams, if you have those goals, these are really important for your experience.”