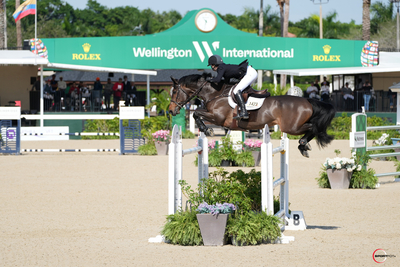 Alison Robitaille on Oakingham Lira (Photo by Sportfot)“My goal early last year was to be jumping the three-stars by the end of this year, so this is really great," said Robitaille. "I’m just so happy with how my horse feels; we’ve been building our partnership all year long. After walking in today, we really feel like a team.”

Robitaille won with a clear round in 41.66 seconds.

David O’Brien of Ireland was second on El Balou Old, also clean in the jump-off  but just two tenths of a second behind Robitaille, stopping the clock at 41.8 seconds, and fellow Irishman Darragh Kerins on Lissino was third in a jump-off time of 42.91 seconds.

Robitaille on Oakingham Lira will return to the International Arena on Sunday to compete in the competition’s featured event, the $137,000 Grand Prix CSI3*.

The top 29 riders from the Friday class qualified to compete on Sunday.

As the second to go in the jump-off, Genn took an early lead with his time of 42.726 seconds that no one could beat.

Also clear in a time of 44.611 seconds, Carolina Drummond of Brazil on Joules VD Hooghoeve was second, and Nicolette Hirt was third on Calgary 5 after finishing the jump-off in 46.444 seconds with two time faults.

“This was only my third time riding this horse, but he’s super brave and I trust him a lot,” said Cawley. “He was super confident and knew what he was doing, and we had so much fun today.”

The class was held in a “Hunt and Go” format, meaning the first portion of the course was judged as the Classic round, while the latter half of the trip was scored as the Handy phase.

Cawley's trip in the Classic portion of the class was given a base score of 82 and two additional points for taking the high-option fences for a score of 84, and a matching Handy phase score to put her at the top of the leaderboard.

“For a hunt and go class, I think you have to focus a lot more because you only get one chance to go in the ring," said Cawley. "Once you finish the hunt portion, you go right into the handy. Today, it started after the two-stride line with a tight turn back to a trot jump. I thought it was a great way to start the handy portion because it made you think about the turn you had to do.”

Placing second was Chaz Harpman on Evolutionary, with a cumulative score of 158.1, and Angela Calicchio was third on City Walk with a total of 158 points.