Daniel Bluman on Ladriano Z won the $215,900 World Cup at the National 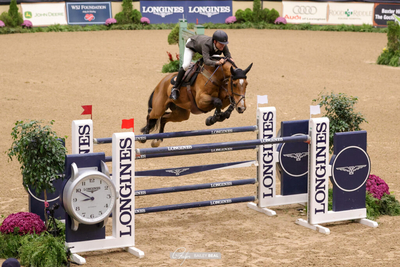 Daniel Bluman on Ladriano (Photo by Bailey Beal)Only seven from the starting field of 36 were clean in the first round.

Bluman won over a group of riders, including most of the few top riders showing at the National, that competed on their second best or younger, up-and-coming  mounts

Quite a few spectators were in the seats at the Alltech Arena for the first time during the National's run.

Devin Ryan  on Eddie Blue, coming off his win from Thursday evening’s international speed class,was the first to go clean and was the first back in the jump-off.

Ryan had also been first to go in the Speed class, and again he set the bar high, finishing clean in 37.84 to eventually finish fourth.

Bluman went a couple of trips later and secured the win with a jump-off time of 35.13 seconds.

“MY PLAN was to do a little bit of what I saw Devin do and try to edge him in the turns," said Bluman. "Then when I was about to go in, my cousin Mark told me to do nine strides from the wall to the liverpool, and that’s pretty much how it worked out. Jump number three was a very difficult jump in the jump-off because the horse spooks at the wall. My plan was not to take a big risk, but then I just did.”

Hunter Holloway on Pepita Con Spita and Dello Joio on Cornet's Cambridge, going second and third from last, fought for the top prize.

Alisha Cunniffe on Vivaldi Du Theil withdrew during the jump-off and finished seventh.

“During COVID the horse actually got injured," said Bluman of Ladriano Z.  "He wasn’t really doing that much, but that’s how the sport works. He was out for a while and we weren’t really sure what was gonna happen with his career. Last year the National was the first Grand Prix he jumped, and he finished third. Since then he’s had a pretty good run and been very consistent. He doesn’t show that often – this is the 10th horse show he’s jumped this year, and it’s good to have a win. He’s been second multiple times and third, but tonight he won. It’s great for the horse, I’m really happy that he gets to put his name on a prestigious horse show like this one.”

“My horse has a big stride so I can open him up, but the consequences are in the turn," said Dello Joio. "He got down the five stride line really easy and I made a tighter turn, but I had to slow him down, so I think I lost a little time there. I got down the nine easy and then actually slipped, but that might have helped me a little bit for the next oxer. He made a big effort coming out and landed a little bit heavy. But I couldn’t be happier with this year and this horse’s progression – second in his first world cup! I’m really happy.”

“My plan might have been a little bit different just because Pepita Con Spita is a medium strided horse," said Holloway. "I was planning six strides at the first one but bowed it off the left lead. That way, I could have a tighter turn back to the wall. I think that turn worked out really well for me. But maybe I was a little slower after the liverpool. And that turn, I did lose a little traction there, then I tried to be as fast as I could. But these boys really laid it down today. And they did a great job.”