FAIR HILL, Md.--Woods Baughman of Lexington, Ky., held onto his overnight lead in the Maryland Five Star after two days of dressage on Oct. 14 and heads a very tightly packed field of 24 competitors going into the cross country on Saturday. 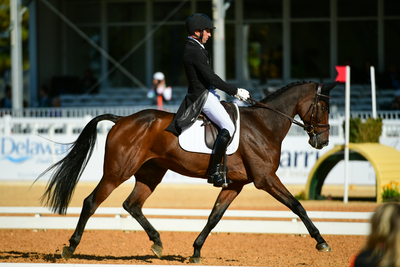 Tim Price, second after dressage (Photo by Allen MacMillan)Baugman riding C'est La Vie leads on a score of 27.2 with World Number One Tim Price of New Zealand riding Coup de Coeur Dudevin second on 27.6 and Alexandra Knowles on Morewood third on 28.6, but the top10 are only separated by 2.7, so Saturday's cross country looms extremely importantly.

From top to bottom of the 24 competitor field there is only a 12.6 difference.

"I've been jumping big tracks all year with lots of different horses," said Price. "You'd think you'd get used to it, but I'm quite concerned about this one. It's a super track,but that's good, because it brings out the best in us riders."

“I BELIEVE in my horse’s ability, and it’s great fun to come over here,” Price said. “This is a fantastic event. I’m really excited for Ian Stark’s course this year and the way he’s changed it up. It’s big; it’s serious; it’s got some decent questions that we’ve never quite seen. Ian has his own brand of cross-country design, and that’s very exciting. You know that all of us 5 Star riders and our horses are going to give it a good go.” 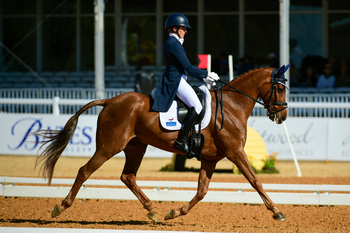 Alexandra Knowles, third after dressage (Photo by Allen MacMillan)"He was such a good boy, so focused," said Knowles after her dressage test. "He tries his heart out. There's a lot to do tomorrow.It's a hard course, but I'll give it my best."

Knowles said that she has had Morewood for about four years.

“He’s got a lot of personality,” Knowles said. “He’s an excellent cross-country horse who just enjoys every minute of it. That was a great fit for me when Katherine O’Brien bought him, since I wouldn’t be the most aggressive cross-country rider. I love dressage and working on show jumping. To have a horse like him complements my riding very well, so the last few years have just been a steady progression of building our confidence and strength."

"This is our second year at the 5 Star level," said Knowles. "I have complete faith in him, and I think he has complete faith in me. It makes every event fun and something to look forward to. This horse ran very well here last year, but the going might be a bit heavier than last year,"

The USEF CCI3*-L Eventing National Championship dressage phase also concluded in the morning with several changes on the leaderboard. 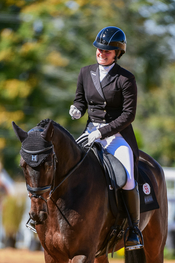 “He’s a really special horse,” Hollberg said of the 15-year-old Holsteiner gelding. “He came from Germany for Christa Schmidt to ride herself. She worked with him for a little while, but he can be a bit hot and horse shy when other horses canter at him. I was lucky enough to take over the ride a few years ago."

“He’s a big teddy bear,” she said. “He’s the sweetest horse in the world. He has such a cool confidence, and he loves his job. He’ll do anything for me. The harder and stronger I ride him, the better he does, and I think that definitely showed today.”

Elisa Wallace and Cassie Sanger have moved into second and third, respectively.

All eyes are on Saturday’s cross-country phase, which will feature jumps going through the Main Arena and familiar sights such as the Fair Hill International Drop and crab-themed MARS Sustainability Bay.

“The most important thing for me this year was moving the start and finish,” said course designer Ian Stark. “Last year, I still wasn’t quite sure how everyone would handle the terrain. Some horses finished with a good gallop, and some horses were pretty tired. For me, this year’s whole flow is better. It’s allowed me to keep a good 5 Star track all the way through. It’s still technically difficult, of course, but my goal is always to get our athletes home.”