PRATONI DEL VIVARI, Italy--Chester Weber''s dressage score of 41.52held up for the lead in Driving Dressage at the World Championships until the very last few whips of the 37 competing, but then he was beaten by Boyd Excell of Australia,, who scored 34.13, and Marieke Harm of Germany, who scored 38.85 on Friday, Sept. 23.. 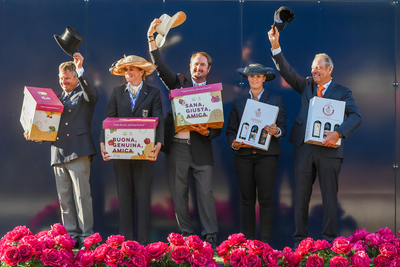 The top five in Driving Dressage received a gift box. Chester Weber is  in the center (Photo by Allen MacMillan)Only 17 of the entrants are competing on teams, with the remaining 20 competing as individuals.Five of the teams have three whiis while one, Australia, has only two, and only the top two scores on each team are counted.

With the marathon on Saturday where scores can change dramatically, only seven penalties separate the top three individuals, but third through fifth is even closer, with only one point separation, as Anna Sandman of Germany scored 42.52 and Lisbrand Chardon of Netherlands scored 42.98.

The Top five after Dressage got a fancy gift box of local stuff, mostly Fancy local vintages, which was in line with recognizing the array of agricultural specialties of the region.

Germany, Michael Brauchle, Harm and von Stein, leads the team competition on 88.03, with Netherlands, Bram Chardon, Ijsbrand Chardon and Koos de Ronde, is second on 89.23,, and Australia, Excell and Tor van der Berge, is third on 91.50.

THE U.S. had originally fielded a team, but Misdee Wrigley Miller had to drop out on Sept. 13 due to her own health issues. 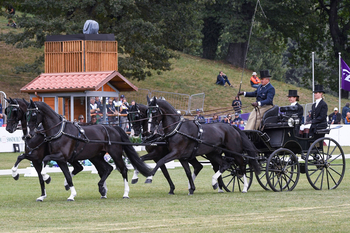 Boyd Exell (Photo by Allen MacMillan)Exell, who is leading individually, is defending his World Championship and has been World Champion multiple times.

“Very pleased, horses were very light and dancing and it felt safe but showing off," said Exell of his dressage. "Maybe disappointed because it felt more like a 32 than a 34."

"This team is experienced and solid and one of the best teams that have been around the world, and I’ve had teams that got 29’s and 30’s in dressage and these are better so I’m disappointed that the judges don’t go ‘hey, this is like the Totilas and Valegro team," said Exell. "I love driving, the score is only the icing on the cake. The horses - my right leader is Checkmate and today he was the showpiece, he was a wheeler in Normandy and Tryon and now he’s a leader. He’s always been a really special horse. Celviro is my left leader, he’s the solid one, every time he delivers. I have a new wheeler called Hero and he did well, he’s a marathon specialist. I have a nice lead but it’s a three-day competition and a lot can go wrong. We had problems in Aachen in the cross-country and your five-point lead is not enough so it’s not over until Sunday afternoon."

“I’m really happy," said Harm. "I had a little bit of pressure because I had to do the dressage score for the team and we made it. It’s totally different when you are driving just for yourself, a lot more pressure. I couldn’t be happier."

"It’s a mixed team of horses, Dutch Warmblood, Oldenburger, Westphalian," said Harm. "We’ve been together as a team a long time and we know each other really well. They are aged between 11 and 16. I started riding, my mum also rode and had problems with her back so she started driving, and one day I took the reins and started driving Pony Singles and in 2010 I was here for the World Singles Championship and won the gold medal with the German team - so this is a good place for me!. After that I had four Single horses and we put them together in a team and in beginning everybody said you can’t do that as a woman, it’s too strong and too hard in the Marathon. And the Marathon is hard because the men are stronger in Marathon tomorrow for sure. But I can do a good Dressage and good Cones and try to lose not too many points in the Marathon.”

The marathon is live streamed on ClipMyHorse.