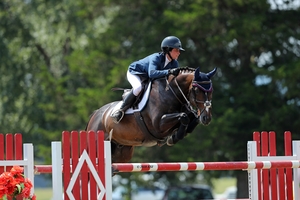 Dominique Damico on Woodstock OIn the Grand Prix Ring, the week began with the $5,000 Open Welcome, which Tracy Magness of Hughesville, Md., on Intenz Van HD won with a lightning fast jump-off in 45.952.

Magness followed up her win from Wednesday with a blue ribbon finish in the $10,000 Prix, crossing the timers in 38.842, also on Intenz Van HD to capture top honors.

In second place was Marylisa Leffler of Brookeville, Md., on Daliante M in a time of 39.369, and Damico placed both the third and fifth place with Dorella HBC and Woodstock O in respective times of 40.728 and a four-fault time of 37.450., while Jennifer Brennan of Norristown, Pa.,  and Mac was fourth in 40.784.

In the $20,000 HITS Open Prix on Sunday, riders faced a challenging course.

DAMICO and Woodstock O had the only clean round in the jump-off to win the Open Prix in a time of 47.540.

Agustin Rosales of Ocala, Fla., was second with the fastest four fault round on Capelius S, four faults in 39.710, with Leffler on Daliante M third in a four-fault time of 42.008, and Magness on Intenz Van HD fourth.

In the Hunter Rings, riders competed for blue ribbons and points toward the Hunter Prix Finals at the HITS Championships, Sept. 5-9 in Saugerties, N.Y.

Taking home top honors in the $1,500 Devoucoux Hunter Prix was Damico and Nemisis 11 with scores of 85 in each of her rounds for an Overall Score of 170.

Ashley Helms and Fred A Stare were second with scores of 77 and 76 for a two round total of 153, and rounding out the top three was Katie McAfee and Cappuccino with scores of 70 and 80 in their two rounds, for a final score of 150.

Paige Jones on Charlie Brown won with scores of 77 and 76 for a combined score of 153, second was Lydia Davidson on Park Avenue, who scored a 72 in the first round and a 78 in the second round to finish with a 150 overall, and with an overall score of 144, Ana Bertozzi and Mistake Identity were third.