BRIDGEHAMPTON, N.Y.--Californian Karl Cook on Kalinka Van’t Zorgvliet won the $74,000 CSI5* Grand Prix Qualifier on Friday, Sept. 2 at the Hampton Classic Horse Show, one of only two from a starting field of 35 that made it to the jump-off. 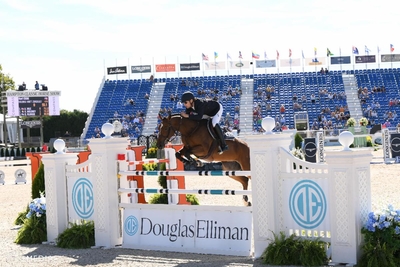 Karl Cook on Kalinka Vant Zorgvliet (Photo by KindMedia)Cook was clean in the jump-off in a time of 40.4, and, with eight faults in the jump-off, Aaron Vale on Prescott finished second.

Ireland’s Richie Moloney had 1 time fault in the first round to finish third on Coco Beach.

“The first round was highly technical today,” Cook said. “There were some really technical parts, and the time allowed was super tight, making it even harder. Since there was only one clear before me, my goal was just to get clear. My mare is also very hot, so sometimes getting the exact right speed is hard. She was so good in the first round and again in the second round, and I couldn’t be happier.”

Vale has reclaimed the lead in the $30,000 Rider Challenge with a total of 200 points, knocking Amanda Derbyshire of Great Britain into second with 198 points, and Moloney is third.

DERBYSHIRE on Wonder If won the $37,000 Grand Prix Qualifier, also on Friday, over 14 that went clean from the starting field of 57. 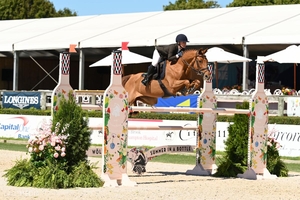 Amanda Derbyshire on Wonder If (Photo by KindMedia)“I’ve had ‘Juicy’ since the start of Florida this year,” said Derbyshire. “She’s the most awesome horse. She’s literally a big pony with a really big heart. She’s been nothing but perfect since we got her and is the nicest, friendliest horse. Every time you go into the ring, you know she’s going to try for you, and it’s such a good feeling to have. Even though she’s little and doesn’t have the biggest stride, she makes up for it by being really fast and economical over the jumps.”

“I thought the course was beautiful,” Derbyshire said. “I thought there was just the right amount of clears after the first round, and the jump-off was great with a lot of rollbacks and a few gallops. It certainly worked out well for me. The owner, Becky, was also here to watch today, and it’s just amazing. She’s my biggest supporter, and I will always be grateful to her.”

Venezuela’s Luis Larrazabal on Balou Boy was clean in 37.660 seconds to place second, and Jonathan Corrigan on Nadal VD Wateringhoeve was third in 69.980.

Amy Shafmaster of Portsmouth, N.H.,, rode Infante SK to the fastest of only two clear rounds in the Amateur Jumper Classic with a jump-off time of 37.266 seconds. 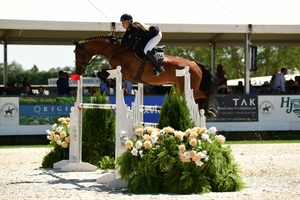 “Prince of Peace is also a really fast horse, so I didn’t have to go all-out with him,” said Vanderveen. “He’s quite the character. He’s taken me a bit of time to figure out. He’s got a quirky personality, so he’s a little special in the barn. He always likes to have his groom with him; we call it ‘needing his support human.’ But he’s won many classes over the years and been great. He’s done speed classes and grands prix, and it’s nice to have a horse that I can use in both divisions.”