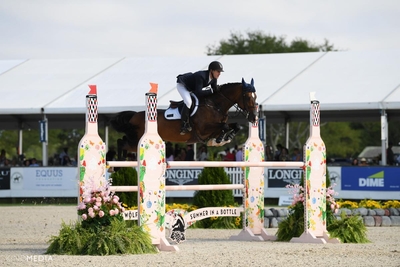 McLain Ward on Faro (Photo by KindMedia)The Hampton Classic runs through Sept.4, and the Jumper Challenge drew 59 entries as many of the open jumper riders wanted to test the new surface.

The new all-weather footing was  installed by Travis Gould and his JTWG, Inc.

It is engineered using the same processes used for the footing in the International Arena at Wellington International and Tryon Stadium, both of which have received rave reviews.

“I had a game plan for Faro going into the second round,” Ward said. “I also had a second horse competing, Catoki, who is sort of my speed specialist. Faro answered all the questions, and even though we had a mishap with Catoki, it still worked out nicely.

“I THINK the new footing is great,” he said. “I’ve been a big proponent of having a modern all-weather surface here in the Hamptons. We’ve had some dry weather so far, but as we know, we can get rain here this time of the year. I think this arena is going to make for even greater sport. It’s always been a great arena for us, and it’s a great place to come every year.”

Nearly a second off Ward’s time, Great Britain’s Amanda Derbyshire on Wonder If was second in 32.258 seconds.

Alison Robitaille on Diane De Sivry was third in 33.365 seconds.

This win gives Ward an early lead in the $30,000 Rider Challenge with 100 points,but Derbyshire and Robitaille are not far behind with 80 and 70 points respectively.