Para Dressage saves the day for the U.S. at the Herning World Championships

HERNING, Denmark--Dressage, Para Dressage and Show Jumping were contested at the World Championships in Herning, and due to various problems and/or injuries, neither the U.S. dressage of show jumping teams medaled while Para Dressage saved the day for the U.S. with three medals, one team and two individual. 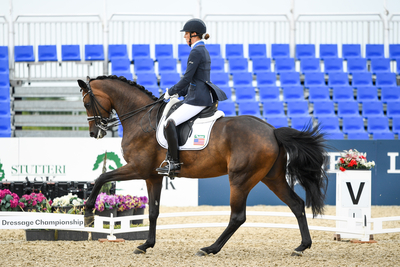 Kate Shoemaker (Photo by by Allen MacMillan)Historically, the U.S. has medaled in both dressage and jumping at both the World Championships and Olympics, but the dressage team placed sixth and jumping 11th this year.

While the dressage team missed a medal by little problems in each of its top three rider's test, the show jumping team was decimated by injuries and was left fielding the best horse and rider combinations left standing.

The USEF decided almost a decade ago to develop  a program for para dressage, and that has paid off with team bronze medals at both the Tokyo Olympics and the World Championships.

This year, three of the riders were on new, different horses from the ones that they had ridden in Tokyo, and one, Fortunato H20, is a 6-year-old stallion who is also a breeding stallion.

So the future looks good for the U.S. in para dressage.

OFFICIALS have said that the biggest goal in Herning in all three disciplines was to qualify for the Olympics, and both para dressage and dressage did qualify, but jumping did not. 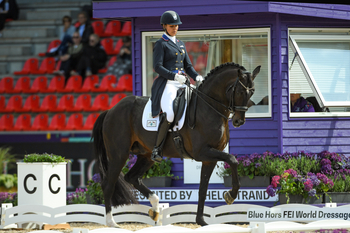 Adrienne Lyle (Photo by Allen MacMillan)Dressage qualified by placing sixth in team competition, but three of the riders, Ashley Holzer, Adrienne Lyle and Steffen Peters, had problems with their tests that dropped their scores. and still the team was only 10 points off vying for a medal.

Chef d'Equipe George Williams said he didn't like commenting on judges' scoring, but he did admit that all three of their scores were in the low range of the their average rides.

Holzer's mare Valentine was undone by the noise in the stadium and her score of 61.258 was far below her scores from Florida.

"Ashley's ride was a great disappointment for her, but she handled it very well," said Williams. "There was a very electric atmosphere in the stadium, and Valentine is a younger, less experienced horse."

"I was very, very happy with Katie Duerrhammer's ride on Quartett," said Williams. "Her debut at this level was within her score range. She had a solid ride."

"Adrienne and Steffen were maybe in the lower score range," said Williams. "Each of them had little things in their tests, but for both, Adrienne especially, their scores improved in the Grand Prix Special."

"By qualifying for the Olympics, that allows us to be more flexible in the Pan Am Games," said Williams. "We have some very talented horses and riders coming up."

THE SHOW JUMPING team was decimated by injuries, first Laura Kraut was injured in a fall schooling, then she lost her Olympic mount Baloutinue, and Jessie Springsteen lost both Don Juan van de Donkhoeve and her reserve horse, RMF Zecilie, all to injury. 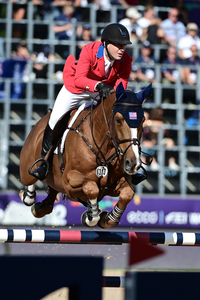 McLain Ward on Contagious (Photo by Allen MacMillan)Then Kent Farrington didn't have a horse experienced enough for a big international competition, so the U.S. was left with only one  world high ranking and experienced rider, McLain Ward.

Ward and Moggre did at least qualify for the first Individual competition.

Ward's mount, Contagious, had been spectacular at Aachen, winning two of the biggest classes at that show, but Contagious couldn't handle the very deep sand going at Herning that got deeper as horses competed over it and had three rails down in the Individual before Ward pulled up.

Moggre's Balou du Reventon stopped on a turn to the fourth fence - presumably having seen something that really bothered him, as he didn't stop at a fence and had never done anything like that before.

The U.S. must now qualify either by being the highest placed team that hasn't already qualified for the Olympics at the Nations Cup Final in Barcelona in 2023 or by placing in the top three at the pan Am Games.

While chef d'equipe Robert Ridland admitted the team did the best it could with the talent it had in Herning, he pointed out that the U.S.had been on a fantastic winning streak prior to Herning, winning the gold medal at its three top international competitions, the Pan Ams, Olympics and World Championships consecutively not once but twice, a feat never accomplished by any other country.