DUBLIN, Ireland--Laura Kraut on Confu finished sixth in the Grand Prix of Dublin after a very fast seven horse jump-off. 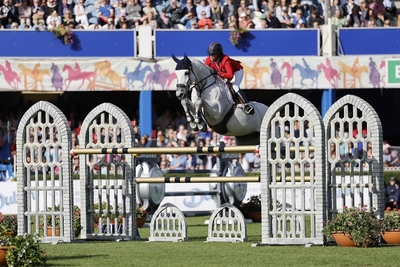 Laura Kraut on Confu in the Dublin Nations Cup (Photo by Rolf Stenberg)"That horse is amazing," said Chef d'Equip Robert Ridland. "He's been around a long time. He can't do three days in a row now, but he's fine for a Nations Cup on Friday and then a grand prix on Sunday. He's jumping better than ever now."

Corfu was double clean in the Nations Cup.

"It was a harder course on Sunday," said Ridland. "He jumped around without a touch. It was a super fast jump-off, and Corfu is not known as a speed horse. Laura was just going hoping to be second or third,"

"Dublin had the largest crowds it has ever had all week," said Ridland. "It's an amazing horse show in an amazing venue. Dublin had two years off due to Covid. In no other show does the President of the country present a trophy, but again the President of Ireland was at Dublin to present the Nations Cup trophy to the home team Irish."

RIDLAND has been coping with having to field teams of inexperience riders on inexperience horses at major competitions as, due to injuries and other problems, he has had to use, basically, what was left.

"We were down to the last few options," said Ridland of the team he had in Dublin.

Ridland began the practice of using one or two young, up-and-coming riders with two or three veterans, but he never advocated, or expected to have to use, three inexperienced riders, some with their second or third horses, in major competitions.

The Dublin team included Lillie Keenan on Queensland E, Spencer Smith on Untouchable 32 and Katie Dinan on  Brego R'BB, who accrued 32 faults before Kraut went clean, leaving the team on 20 faults going into the second round.

"Actually, it was a positive experience," said Ridland. "They were down 20 faults and came back with three clean rides. I don't think that's ever been done before. It was a win for those riders' futures."

Dinan was the only other U.S. rider that qualified for the Grand Prix, and she finished 20th with 5 faults.

The U.S. team's next and last Nations Cup of the year is at Spruce Meadows.

"Kent Farrington, McLain Ward, Gina Rinaldo and Nick Dello Joio will be on that team," said Ridland. "It's the first time in a long time I've has at least two veterans on a team."