HERNING, Denmark--The U.S. Para Dressage Team won the bronze medal in team competition in Para Dressage at the World Championships, following up on the team bronze at the Tokyo Olympics. 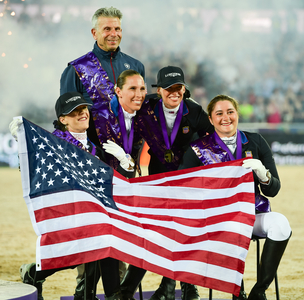 U.S. Para Team bronze medal team (Photo by Sarah Miller for MacMillan photography)The team finished on a final score of 225.335 behind the Denmark team that won silver on a score of 229.751.

The Dutch team won their second consecutive World Championship gold, finishing on a team total of 230.225.

Chef d’Equipe Michel Assouline commented on the team’s ability to overcome challenges and bring new, young horses into the spotlight while continuing to deliver top performances on the highest level.

This was another building block to the program’s success after last year’s Tokyo Paralympic Games team bronze.

“What we have done really affirms our position on the world stage," said Assouline. "We got the bronze in Tokyo and to get this bronze again here means that it wasn’t a fluke, and the level of performance is great. I’m absolutely ecstatic with what they’ve done as a team here, and very proud of this team, and these girls.” 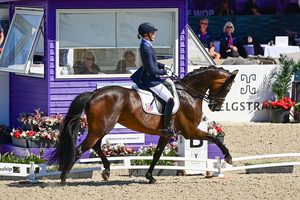 Kate Shoemaker (Photo by Allen MacMillan)"Me and my mare are in a very new partnership, I found her after a very long search in Europe," said Shoemaker, who had the highest U.S. score of 75.415. "In the beginning of the program, I was just so happy to feel; We are here, we are here! She is a good prospect for the future. It was really difficult for me with the cold in the beginning of the week but today was really good."

"It was his first test here, he is only 6-years-old, he was really brave wasn't he?" said Tunnell of Fortunato, who is a breeding stallion but still so tractable. "I have been riding him two months and he is a stallion. I was not really nervous, I trusted him to behave. Katie Shoemaker thought he was a good match for me. He is fabulous, he is very much a baby, he wants to play." 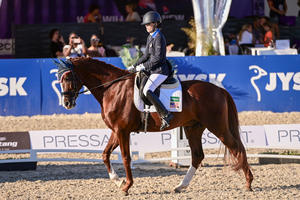 Roxanne Trunnell (Photo by Allen MacMillan)"I am feeling really good with our test," said Hart, who scored 74.706. "Tex" can be really tense sometimes, so we have worked a lot to get the relaxation we have in the warm-up into the arena. We changed a few things at home and this is our first championship where we could try it out. I really enjoyed the medium trot and the come-backs, I could just sit back, and he was right with me. I could really enjoy my whole ride rather than micromanage things, that was a fantastic feeling because it means I have a really happy athlete."

"We had a few small things today but overall, it was good," said de Lavalette, who scored 73.235 to be the drop score. "My horse is a bit quirky, we have a fairly new partnership but have come together nicely."

“We had expectations, absolutely, but to get the medal was above my vision and we wanted to get the qualification for Paris and we did more and that’s this is all about,” Assouline said. 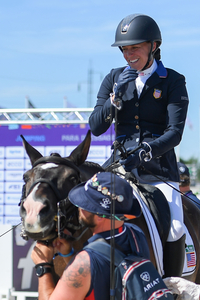 Rebecca Hart (Photo by Allen MacMillan)With their Paris 2024 Paralympic qualification secured, the team can now look ahead and prepare for a continuation of their sustained progress on the international stage over the next two years and in the lead-in to 2024.

With two team medals in two years, the team will have the pressure of maintaining and building on their success with their eyes on the podium once again in 2024.

“We’ve had incredible support from our sponsors, of course, and all the riders have great backup," said Assouline. "Three of horses were new here and one of the horses was loaned by another coach, which is the horse Roxanne is riding. It’s a 6-year-old stallion who isn’t very experienced and to see what she could do on the world stage with that horse is really amazing. The other horses too. Most of them are young horses, new partnerships with at the most six months together, and I think that’s a very positive and bright trajectory for our future.” 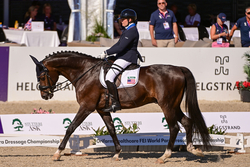