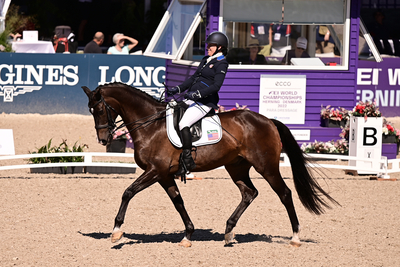 Rebecca Hart (Photo by Allen MacMillan)Hart received a 73.147 percent for third, while Tobias Thorning Joergensen of Denmark on Jolene Hill won the  gold with 78.676 percent and Natasha Baker of Great Britain on Keystone Dawn Chorus took the silver on a 73.970 percent.

Hart put on a harmonious display in their Grade III Individual Test, receiving strong marks in their trot work and bringing a relaxed and light presence to the arena.

She is the most veteran combination on the Para Dressage Team for this championship, and she was pleased with her overall performance on their first day of competition.

"I'm feeling really good about that test," said Hart. "Text can be a little bit spicy sometimes and we've been working a lot on his relaxation and getting what we have in the warm-up and bringing that loveliness into the competition arena. I really enjoyed the mediums and the comeback today. He stayed there and I took a breath in, and he was right there and all of it I could really just enjoy and not micromanage things and it was a really nice feeling. He was so much happier out there and it's nice to have a happy athlete and happy horse."

"WE'VE BEEN tweaking a few things at home and this is the first big championship environment we've been able to try it in and it's worked really well," said Hart. "He gave me a great feeling today. For me, we've found that doing a walk tour instead of a trot tour before we go into the ring actually works better for him. He can see everything, take a breath and focus. Earlier in our career, I never thought I would be able to do that because we would lose energy, but he's with me even more now because he's comfortable in his own space." 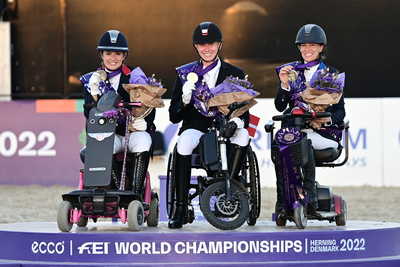 The medals in Grade 3 (Photo by Allen MacMillan)"I am wildly excited to see our program growing like this," she said. "I am here with three amazing riders on new young, incredibly talented horses, and to have depth in our program where we've got riders with multiple horses and sponsors who are so strongly behind us, it's just fantastic to see where we are now compared to 20 years ago and to consistently be in that medal hunt is the goal. I want to see my teammates up on the podium with me, and that's what I'm looking forward to for the rest of the week and will give us something to look forward too."

Team competition begins Friday with the Team Tests for Grade IV, II, and I, while Hart will conclude competition for team medals on Saturday with Grade III.

Competition will begin Friday with Grade IV at 6:21 a.m. ET with Kate Shoemaker on Quiana, while Beatrice de Lavalette on Sixth Sense will head into the ring for Grade II competition at 10:43 a.m. ET.

Roxie Trunnell on Fortunato H20 will be the last combination in for the team on Friday, riding at 12:52 p.m. ET.