Adrienne Lyle qualifies for Freestyle at the World Championships

HERNING, Denmark--Adrienne Lyle on Salvino qualified for the final class of the World Dressage Championships by scoring 75.669 on Monday, Aug. 8 to place ninth after the Grand Prix Special Test, placing her in the top 15 that will compete in the Freestyle on Wednesday, Aug. 10. 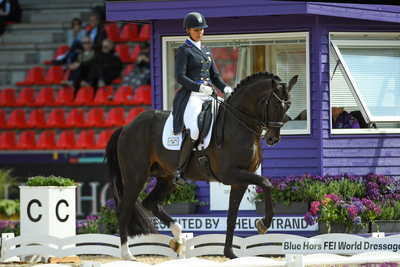 Adrienne Lyle (Photo by Allen MacMillan)But being ninth going in, Lyle has little change of a medal.

Steffen Peterson Suppenkasper is the second reserve for the freestyle after finishing on a 73.708 percent.

Lyle of Wellington, Fla., and Salvino had strong piaffe and passage work and a mistake free test.

“That’s the first Special we’ve ridden since the CDI5* in February in Florida, so I was really happy with him, and he was a bit more relaxed and looser than in the Grand Prix, so he was able to show off a bit more in the piaffe and passage today and he didn’t put a foot wrong, so I can’t complain about much,” said Lyle. “Overall, he felt really honest, and he was going on his own so I didn’t have to use much leg because when he has that energy and drive, I can just pilot him around.”

THIS WILL be the first time Lyle has ever ridden a freestyle in championship competition, and she is looking forward to showcasing the pair’s choreography under the lights.

“I think he’s in really good form and they may not be our highest scores, but he feels great in the warm-up and is always with me, so I can’t be happier than that," said Lyle. "I love riding his freestyle and it’s the one that we did at World Cup Finals in 2019. We’ve changed a few things around and added some elements for the degree of difficulty, but I love his music. It’s really powerful and elegant and I think it’s going to be amazing in this stadium full of people."

Peters of San Diego, Calif., on Suppenkasper had a minor mistake in their passage tour to receive a 73.708 percent from the judging panel, which placed them just outside of the top fifteen toplace 17th place, making them the second reserve for Wednesday’s evening class.

“We had one mistake from the passage to the medium trot, but the rest of the test felt great," said Peters. "The judges saw it different than I did and that’s okay, that’s a part of the game and a part of sport. I thought his extensions felt great and he was a bit more active in the piaffe today, which is what we were looking for because he sways a bit less, and he did some beautiful pirouettes. Overall, I’m really very happy with him and wish the result was better.”