U.S. sixth in World Championships but qualify for the Olympics

HERNING, Denmark--The U.S. finished a disappointing sixth in the Team Dressage at the World Championships on Sunday, Aug. 7, while the home team Denmark squad won the gold, but the good news is that this finish at least qualifies the U.S. for the Paris Olympics. 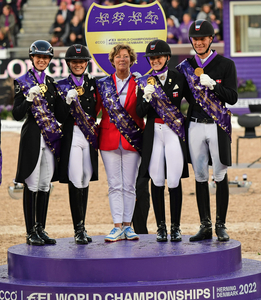 The Denmark Dressage Team (Photo by Allen MacMillan)The team finished on a final team score of 220 while Denmark won the gold medal on a 235.451, with Great Britain winning the silver with a 234.233, and Germany taking bronze with a 230.791.

"I am so thrilled to make it to the World Championship with Marshall-Bell, I was pleasantly surprised to discover that he did not even clip his ears over the atmosphere and the wild applause in the stadium," said Daniel Bachmann Andersen of the Denmark team, who scored 76.584. "I am so happy that my safe round actually turned out to be a personal best, I only aimed to play it safe for the team. The stadium is just crazy amazing, I am immensely proud to be part of our team."

"Thank you to the audience – you rocked the arena to perfection," said Cathrine Laudrup-Dufour of Denmark, who scored 81.864. "I was a bit nervous, I am always nervous. But today I calmed Nathalie and Kyra and told them; we can do this. My horse was nothing short of amazing. I feel so immensely proud for what my team members have done, we are all so proud of our achievement."

"This is so special," said Carina Cassee Kruth of Denmark, who scored 76.863. "We're used to support, but not like this."

"I had an amazing ride yesterday,"said Nanna Merraid Rasmussen, who scored 76.723. "Blue Hors Zack did everything I askked. It was a personal best. I'm out of the world."

THE U.S. had won a silver medal in the last World Championships in Tryon, and the team had hoped for a medal. 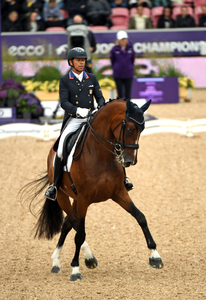 Steffen Peters (Photo by Allen MacMillan)But those hopes were essentially dashed when Ashley Holzer's Valentine was spooked by the crowd and had a very poor test to score 61.258.

Added to that, neither Steffen Peters of San Diego, Calif., on Suppenkasper, 74.767, nor Adrienne Lyle on Salvino, 74.394, scored as high as they usually do.

“I wanted to go in there and do my very best. Mopsie was really excited today, and that extended canter made the ring feel very small,” said Peters. "He lowered his neck, and I couldn't get him up as much as I wanted to. Well, it's pretty amazing when you have so much power underneath you. I think we can step it up a bit tomorrow. Pressure? You get there, you'll always be nervous, I've learned to accept it.”

After Holzer's poor score and with qualification for Paris on the line, Peters and Lyle were both under pressure to produce results for the team that would help then secure a combined score high enough to finish within the top six countries in the team portion of competition.

As one of the most veteran athletes for the program, Peters rose to the occasion to deliver a solid score with Suppenkasper in the harder of the two tests for the gelding at this level.

“When you go into the ring you always get a little bit nervous, and I’ve accepted that," said Peters. "Back in the barn when you go to get ready, that’s usually when your heart rate starts to go up, but it’s the most normal thing in the world I’ve learned to take that with me into the arena, but the pressure is there for sure. Looking back to four years ago he’s made huge steps forward and I’m very proud of what he gave me today.” 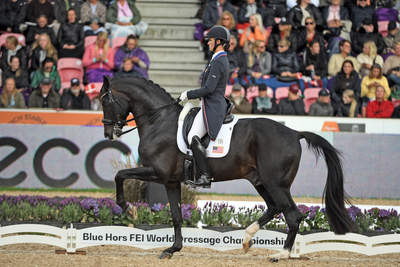 Adrienne Lyle (Photo by Allen MacMillan)As the anchor combination and the final ride of the competition, Lyle and Salvino fought through a mistake in their canter zigzag to earn a 74.394 percent and ultimately lift the team to their goal of Olympic berth for 2024.

Salvino showcased strong piaffe and passage work, which was trending them around the 76-percentage mark before their miscommunication in the canter tour.

“Our main goal here was to qualify our country for an Olympic berth, and we did that and are super excited about that since that was our main mission here,” said Lyle. “My horse showcased some really nice work today in there but got his legs a bit tangled in the zigzag, so I walked to regroup so he wouldn’t worry about it and carried on, but other than that he had a really good test and we’re looking forward to the special tomorrow.”

The top 15 from the Grand Prix Special qualify for the Freestyle, which will be held Wednesday, Aug. 10.