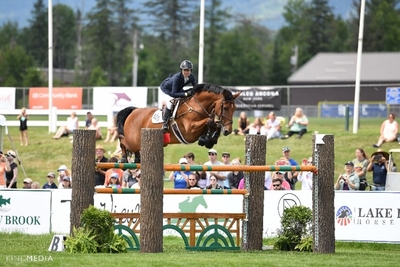 Laura Chapot on Chandon Blue (Photo by KindMedia)Chapot rode two of the four entries from the starting field of 21 that went clean over the 16-effort, first-round course designed by Nick Granat.

Also clean were the defending champion Alex Matz, whose father Michael was an Olympic teammate of Chapot’s father Frank, and 16-year-old Zayna Rizvi.

Matz, who won the class last year on Cashew CR, was first to return for the eight-effort tiebreaker course, and he was clean in 36.882 seconds on Ikigai.

Chapot then followed on her 17-year-old Oldenburg gelding and, as is her wont, blazed over the course, finishing clean in 33.903 seconds.

Rizvi also was clean, but in 35.933 seconds on Exquise Du Pachis, putting her in second place and assuring Chapot of her sixth Grand Prix win in Lake Placid.

She went last in the jump-off on Diarado’s Flying Dutchman, clean in 36.510 seconds which was good for third place.

“HE LOVES it up here, and the footing was great so he jumped really, really well,” Chapot said of Chandon blue, who was two full seconds faster the his nearest competitor. “He was really focused today. He felt super energetic and ready to do the job, so I just tried to stick to my plan, and he really came through.”

Prior to the Grand Prix, Rizvi rode Excellent to the win in the $10,000 High Junior/Amateur Jumper Classic, a member event of the Show Jumping Hall of Fame Jumper Classic Series.

Rizvi on Excellent won with two clean rides and the fastest jump-off time of 34.855 seconds.

It marked the second straight year that Rizvi and Excellent won that class.

Rizvi, only 16, also won a number of ribbons both in junior jumpers and against professionals in the open jumper division at Devon, and she looks like asure bet to go on to compete in Nations Cup classes as soon as she is old enough..

Winning the Open division over a field of 22 horses was Cocolores, owned by Debbie Bianco and shown by Michael Desiderio.