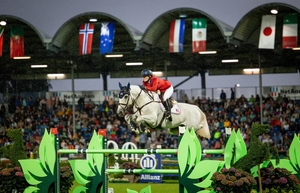 The team was led by Chef d'Equipe Robert Ridland.

Germany won the Nations Cup with 5 faults, Belgium was second with 8 faults and Great Britain was third, also with 8 faults but a slower combined time.

"The course for the Nations Cup was fabulous," said Ridland. "These were eight of the best teams in the world. There were huge crowds, This was sport at its best."

KEENAN of New York, N.Y., was the first for the U.S. to ride over the course designed by Frank Rothenberg of Germany that was set to the maximum specifications.

The course featured 14 jumping efforts and was set tight to the time allowed of 80 seconds.

Keenan had four faults, followed by Reid of Ocala, Fla., who had 8 faults.

The third for the U.S. was Sternlicht of Greenwich, Conn., who had one down for 4 faults plus being just over the time allowed for a total of 5 faults.

Ward of Brewster, N.Y., rode Kasper van het Hellehof, who was competing in his first Nations Cup, and dropped the first and last of the triple combination to add a late 8 faults in the round to move the team forward on 17 faults.

Keenan rose to the occasion in the second round and delivered the only clear of the night for the U.S.

Reid again had 8 faults, while Sternlicht also added 8 in the second round.

Ward produced a strong effort in his second round, adding just two-time faults to keep the team in sixth place and just ahead of a strong team from The Netherlands.

The team completed the second round on a total of 10 combined faults to finish on a final score of 27.

"This was a relatively young team," said Ridland. "It was a perfectly respectable finish. Lillie had a great night."

"Time faults are only bad when they are early and can affect a team's place," said Ridland. "With McLain, there was no reason not to have a time fault. He knew if he had a clean round we would stay ahead of The Netherlands, and he could afford a couple of time faults."

"I like it better when we win,, but we have our eye on the World Championships," said Ridland. "We have riders here and at Spruce Meadows and others at another selection site next week."

Ridland said they were testing riders and different horses to get the best team.

Spencer Smith was the fifth rider in Aachen for the U.S., and he did well in the big class Ward won on Thursday, but Ridland said his mare was a little green, so he used the other four riders for the Nations Cup team.

German chef d'equipe Otto Becker selected Jana Wargers on Limbridge, Christian Kukuk with Mumbai and André Thieme on DSP Chakaria, all of whom made their debut on the Nations’ Cup team in Aachen.

The latter two riders also competed at the Olympic Games in Tokyo and were part of the team that won silver at the European Championships in Riesenbeck.

Wargers was making her Aachen comeback after giving birth.

“Of course we also have some more experienced riders who have often ridden for the team, like Daniel Deusser and Marcus Ehning," said Becker. "But we wanted to bring different riders together to find the right combination in the direction of the World Championships. And these four riders prove that they deserved to be on the team!”