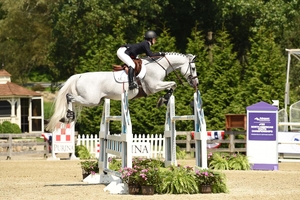 Daisy Farish on Great White Farish didn’t have much room for error in the final round of the Individual Championship, as, if she had just one rail down she’d drop out of the medals.

But Farish rose to the occasion, riding Great White to their second faultless round of the day to claim individual gold in the finale of the North American Youth Championships at Old Salem Farm in North Salem.

“I think having that pressure helped me a little bit, knowing that I had to get this done,” said Farish. “‘Bruce’ rose to the occasion.”

Samantha Cohen and Mckayla Langmeier had put the pressure on Farish with clear rounds of their own, but, when she had a clear round, they had to settle for silver and bronze.

“I’ve done the Hunterdon Cup, Junior Hunter Finals and Young Riders for several years, and I hadn’t won any of them yet,” Farish said. “It’s my last junior year, so it’s a dream come true to add those three titles to my accomplishments. I think it’s a culmination of the team behind me, my horses, my friends, my trainers and everyone at Heritage Farm. It just came together for me this week.”

FARISH STARTED off the week in the lead after winning the Individual Qualifying speed round, but then four faults for a foot in the water while competing for Zone 5 during the Team Final put them into third in the individual standings before the two rounds of the Individual Final.

“That almost gave me a little bit of ease, not coming back in on top today and having that pressure on myself,” she said, but a clear first round vaulted her right back into the lead before the final round, however. Farish knew she had to stick to her plan.

“He’s a super brave horse, the more I challenge him, the better he jumps,” Farish said of Great White, a 10-year-old Holsteiner gelding. “If I just canter around softly, he’s more likely to have one down than if I really ride him up to the jumps and challenge him. I think that’s good for me, because going into the last round today, I knew I could be conservative and have a time fault, but then I thought, ‘He’s going to jump better if I ride it like a real round,’ and he did.”

But things haven't always gone smoothly for the pair.

"For the longest time, we struggled with getting him broke and rideable, because he was always kind of fighting against me, and it made it difficult to get him broke," Farish said.

"I don't know why it didn't pop into my head sooner, but the first day of NAYC last year, we tried this exact hackamore, and from the second we put it on, he was a different horse," said Farish. "He's been great ever since and he loves it."

"I think ever since we changed the bit, his rideability clicked," she said. "He's just 10 so he really started showing us his scope and range. I was young, so I wasn't jumping very big classes either, so all of the big classes we've done together have been both of our biggest classes. He's yet to show me what he can't jump, so I think we're growing together and jumping bigger classes and it makes me happy to see him progress."

“I think the biggest thing for me this week is seeing how far my horse has come,” she said. “He has surprised me in every way. I didn’t think we’d be here today and I definitely didn’t think we’d be winning gold. I’m so proud of him and so thankful to my trainers and everyone who helped him get here and helped me get here. I’m mostly just very proud of my horse.”

Farish will be able to observe what goes on in the stabling, veterinary inspections, schooling and show office as well as being able to walk the courses with U.S. team riders and the chef d’equipe. 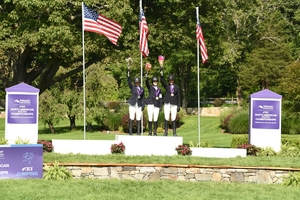 “Coming into today, I was in fifth, and I just wanted to put in two of the best rounds that I could,” Cohen said. “My horse felt great. I had complete confidence in her and I thought she jumped amazing in the first round. In the second round, coming back in second, I knew there were a lot of clear rounds before and I couldn’t have a rail. So, there was some pressure coming in, but I know her so well and trust her so much that I felt confident.”

Langmeier, 18, riding Durosa W, worked her way up from eighth after the Individual Qualifying round to the individual lead headed into the last day, but a rail in the first round on Sunday dropped her down to the bronze medal.

“My horse is a very hot chestnut mare, so in the speed class I didn’t really go that fast,” she said. “Then I was good in the team event, and we were double-clear. Today, I had an unlucky rail out of the in-and-out and then she was super in the last round.”

All three individual medalists, by virtue of their NAYC placing, are qualified to compete on the U.S. Show Jumping Youth Team for the FEI Youth Nations Cup Final in Opglabbeek, Belgium on Sept. 6-9.

The week didn't get off well for Pielet, as she had a run-out in the Individual Qualifying Round that put her into 11th place.

Alexandra Pielet on Helene VE (Photo by Sel Photography)But Pielet didn't let that stop her, as she and Helene VE jumped clear round after clear round to take the junior individual gold.

After putting in two clear rounds to help her Zone 5 team win the junior gold a few days earlier, Pielet, 17, and Helene VE were the only pair to put together two clean rounds on the final day of the Individual Final, which gave her the gold medal.

Pielet had been focusing on the Zone 5 team effort, so she was a bit surprised with her individual gold.

"This is a huge accomplishment," she said. "Getting a medal at a championship has been a dream of mine. It was just a dream come true to be able to go clear in all my rounds and have it pay off."

Pielet got Helene VE three years ago, and she started out showing the mare in children's jumpers.

"She's brought me all the way up to my first U25 classes in Florida," said Pielet. "I never really had that high of expectations for her, but the bigger the jumps got, the more she just kept jumping her heart out and the more comfortable she was."

Pielet used her knowledge of her mare's stride to help jump the testing lines without fault.

"A few places were really challenging because you had to go forward and back, and it really tested their adjustability," said Pielet. "But it was great because it really had you thinking on your feet."

"She has a small stride, so in the first round, I was not really planning on doing seven down the first line, but she jumped in short and then was cool off my leg, so I added there," she said. "Luckily, I know her really well, and I know she's pretty quick across the ground, so I can add in the lines if need be and still be okay on time."

Pielet lives in Highland Park, Ill., but she rides with Andre Dignelli in New York, spending her summers in New York and then commuting back and forth during the school year.

She plans to attend Auburn University in Alabama in the fall.

Elli Yeager, 15 of Wellington, Fla., had been leading the individual standings in her first NAYC until the final round, when she had two rails to earn the silver medal riding her Waliba VDL, a 15-year-old KWPN mare.

"She jumped amazing all week. I just didn't help her enough to the triple [combination] and she had 'a' and 'b' down," Yeager said. "I just recently got this horse, so she's still fairly new to me. I've just been working with her on the flat to try and figure her out. I do jump her at home so I can get to know her better, but she doesn't really need to jump; she's amazing."

Claudia Villamil, 15 of Puerto Rico, won the bronze on her own Quite Close Vd Smis.